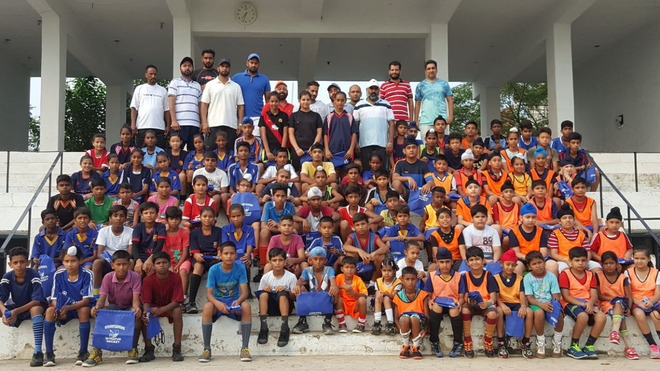 Selection of captain Manpreet Singh and Mandeep Singh of Mithapur in the Indian Hockey team, which will participate in the Tokyo Olympics, has made Punjabis’ proud.

Mithapur’s youngsters and budding hockey players belonging to humble families have a reason to realise their dreams. Most players, who belong to lower middle-class families, said selection of Manpreet and Mandeep has motivated them to work hard.

They recall regarding their meetings and sessions with Indian Hockey captain Manpreet. Around 40 youngsters take training under the Youth Sports Club, Mithapur.

Daman Jyot Singh (19), son of a farmer, still remembers how he was in awe of captain Manpreet, who has now qualified for the Olympics. Fondly addressing him as ‘Paaji’, Daman said it was because of Manpreet that he started playing hockey. “I have met Manpreet ‘Paaji’ several times along with other players. A few years ago, when I saw him on TV and discussed his performance, I immediately asked my father to help me in joining a hockey club. This is how my journey started,” said Daman.

Harvinder Singh (17), who has been playing for the last 10 years, and whose mother works as a tailor said whenever these hockey stars visit the village, they always meet budding players and share techniques.

“One thing I have learnt from him is that you have to have a goal in life and should work continuously without showing any attitude until you achieve your goal,” said Harvinder.

Rajat Sharma 17 has a similar experience to share. “We always look forward to meeting captain Manpreet. Initially, he used to play with us and it’s a proud moment for us that he has qualified for Olympics. He always tell us that if he can reach at this place, anyone can. His teachings are with us,” he said.

Kuldeep, who was one of the first coach of captain Manpreet, said whenever Manpreet comes to the village, he always visits the stadium and likes to spend time with these dedicated players. He said Manpreet teaches them various techniques.

Kuldeep, who has been coaching since 2006, said Manpreet came to him when he was 13. He said he often gives Manpreet’s example to youngsters. “I want budding players to learn fast and soar high in their lives,” he said.