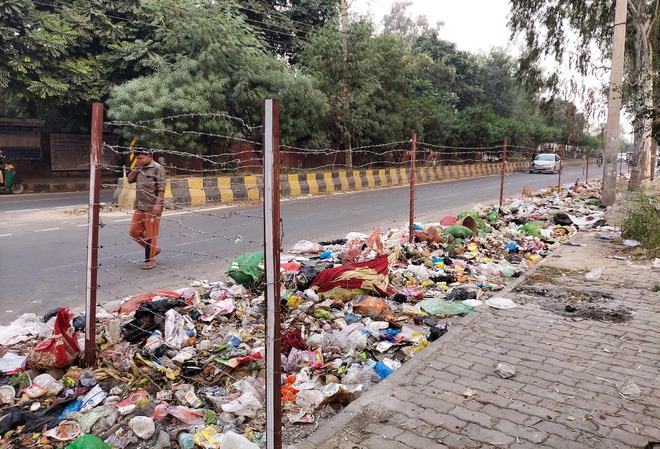 The Ladowali road, near the DAC, where locals dump garbage in Jalandhar. Tribune Photo: Malkiat Singh

The Health and Sanitation Department of the Municipal Corporation has installed barbed wire on the Ladowali road, near the District Administration Complex, to stop locals from dumping the garbage there. Five days have passed, but residents continue to litter the road.

The road is the main route to the DC office, the PUDA Complex and many residential colonies. However, the authorities concerned are not bothered about its upkeep. Rahul Soni, a resident

The fencing on the road has reduced its area. The authorities concerned have failed to improve the condition of the stretch in the past three years. Nazim, a fruit vendor, said, “Heaps of waste on the road have turned it into a mini dumping ground. The foul smell emanating from the garbage troubles the commuters.”

During rain, waste gets scattered on the road, inconveniencing the commuters. Rahul Soni, a resident, said, “The road is the main route to the DC office, the PUDA Complex and many residential colonies. However, the authorities concerned are not bothered about its upkeep.”

The condition of the road has put a question mark on the civic body’s mission of ‘Clean and Green Jalandhar’. Residents claim there is no proper garbage dumping point in the area, forcing them to throw it on the road. The garbage remains unlifted from the unauthorised dumping sites, which have become a breeding ground for stray animals.

“We are forced to use alternative routes. The garbage poses a threat to our health,” said Gurkamal Singh, a resident of the P&T Colony.

A dhaba owner of the area said, “Garbage needs to be lifted soon, as stray cattle feed on it. This blocks the way of vehicles, resulting in traffic jams. Being one of the busiest roads in the city, it is necessary for the MC to install a proper bin here.” Rag-picking should be curtailed as a lot of waste is spilled in the process, he said.

Mayor Jagdish Raja said the MC had installed the fencing to check the practice of dumping waste, and it would continue to take such actions in future as well. The MC was about to complete its biomining waste project, he said.