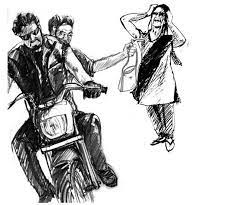 In Gulabiya locality of Basti Sheikh area, a bike-borne robber entered a shop and snatched an elderly man’s gold chain after spraying chilli in his eyes.

The entire incident was recorded in a CCTV camera installed outside. After the incident, the cops reached the spot and recorded the statements of the victim and took the footage in their custody. Shopkeeper Sudesh Kumar said he works as a hand tool operator at Kalicharan Gill Industries Pattern Maker in Basti Sheikh. On Saturday afternoon, a young man came to him. He said some miscreants were following him and they wanted to kill him.

Hearing this, the shopkeeper tried to shut the door and asked him to go out. In the meantime, the robber threw chilli powder in his eyes. As soon as he started rubbing his eyes, the miscreant snatched the gold chain from his neck and fled. The accused was caught in the CCTV camera installed outside the shop.

A case was registered at police division number five.