Amidst Covid-19, swings not set up 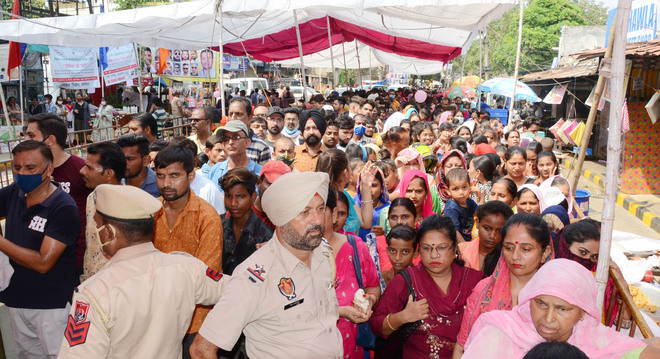 Devotees outside the Sodal temple during its annual fair in Jalandhar on Sunday. Photo: Sarabjit Singh

A huge number of devotees paid obeisance during the Sodal Mela which began in Jalandhar a few days ago. Notably, September 19 is among the most auspicious days of the Sodal Mela as a huge number of devotees pay obeisance and offer Khetri sowed at their homes to Baba Sodal as a token of their mannat (wishes made). Amidst the Covid protocol, swings and jhoolas were not put up at the mela and langars were also restricted to a minimum.

The mela was held amidst a huge police presence where hundreds of police personnel were deputed at and around the Sodal Mela venue. Diversions were also created through various alternate routes in view of the rush which is traditionally witnessed during the mela.

While barricades have been put up near the Sodal mandir, no vehicles are allowed beyond the barricades. A police control room has also been made in front of the temple to keep a watch on the events.

Tarsem Kapoor, one of the trustees of the Shri Sidh Baba Sodal Trust, said, “At least 2 lakh devotees have paid obeisance at the Sodal Mela and today being the day when Khetri sowed by families is offered, it was especially crowded. Langars have been restricted this year. No swings were put in view of Covid Protocol but people thronged the venue in hordes and the Sodal Baba following is such that crowds came to pay obeisance in large numbers. Many families especially paid obeisance on the 19th as it is believed that offerings make wishes granted at the mela.” Notably, newly married couples and childless couples also have a huge following for Baba Sodal.