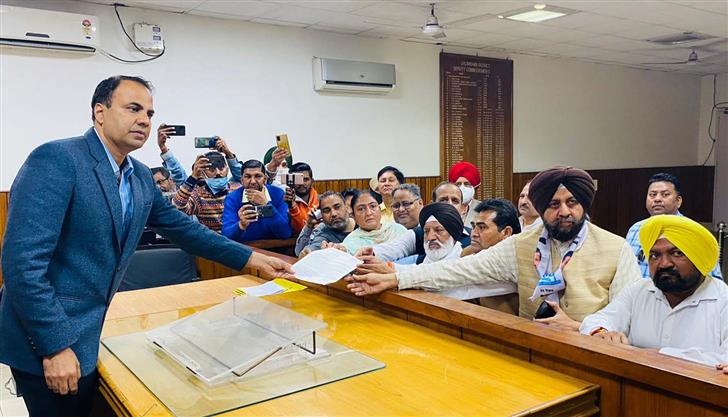 AAP leaders and workers submit a memorandum to the ADC in support of their demands in Jalandhar.

AAP candidate from Phillaur Principal Prem Kumar and Adampur candidate of the party Jeet Lal Bhatti said they wanted to bring to your notice that the BBMB was established during the 1966 Punjab Reorganisation Act. For which there was provision for appointment of a chairman and two whole time members. From 1967 onwards, these appointments were being made from Punjab and Haryana due to these being the big states.

Punjab has been given priority and had been spending more too in the constitution and function of the BBMB. But now the state’s representation in the BBMB is being done away with.

Rajwinder Kaur said this was an attack on the federal structure of the country and an attack on the rights of the state. She said such attempts to weaken the state’s powers were made by the Congress before and had been increased under the BJP government. She said successive state governments had also played a role in the same by not speaking out against these attacks on state’ rights.

The AAP appealed to the Central Government to abstain from taking autocratic decisions altering BBMB rules and stop meting step-motherly treatment to the state.

The AAP members asked the Centre and the Prime Minister to withdraw the decision of ending Punjab’s representation in the BBMB and to restore the state’s rights and place in the BBMB as before. Dr Mohinderjit Singh, Sanjeev Bhagat, Atam Parkash Babloo and Mangal Singh, among others, were also present on the occasion.