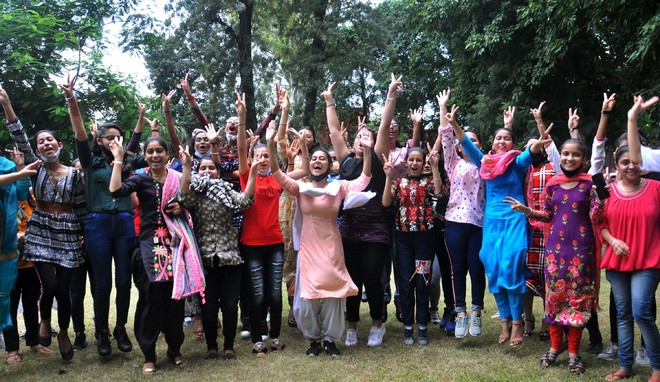 Students of Nehru Garden School in a jubilant mood in Jalandhar on Saturday.

KMV Collegiate Senior Secondary School students have made KMV proud by their outstanding results. As many as 45 collegiate students excelled by getting 90 per cent and above. Nidhi Kaur (non-medical) scored 97.8 90 per cent , Bhavneet (medical) obtained 96.6 90 per cent, Vartika Tuli (commerce) got 97.6 90 per cent and Khyati Avasthi (humanities) got 96.8 90 per cent and bagged first positions in their respective streams. Principal Dr Atima Sharma Dwivedi congratulated the students.

Humanities student Sanjivanie Bhalla secured the first position in the school with 97.4 per cent. Non-medical student Lovepreet Kaur topped science stream with 95.4 per cent. Amanpreet Kaur topped commerce stream with 93.4 per cent. In addition, medical stream student Jaskaranjit Kaur topped the table with 92 per cent. School academic in charge Sanjeev Bhalla said the result has been excellent. Eleven students of the school scored above 90 per cent. Ramandeep Kaur ranked second in (arts) with 93.4 per cent. Besides, Sandeep Kaur and Kiranjot Kaur (medical stream) Jasmine Kaur, Anugraha and Simran (arts) and Shivani have secured more than 90 per cent in commerce stream. Principal Dr Archna Garg congratulated the school staff.