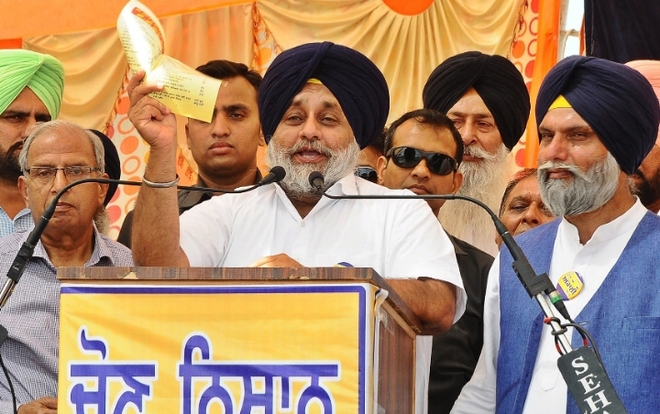 Shahkot in Doaba is considered to be a safer bet for SAD party chief Sukhbir Badal. File

Even as Shiromani Akali Dal has already announced tickets for 74 of the 117 seats, there is a buzz that the party chief Sukhbir Badal could contest from two seats – his traditional seat Jalalabad from Malwa and Shahkot from Doaba.

Since Doaba is the region from where the party got representation on five of the 15 seats that it had won in 2017, it is considered to be a safer bet for the party chief. Shahkot seat too has been traditionally a stronghold of Akali Dal as former minister Ajit Singh Kohar had won five consecutive polls from here. It was after his demise that byelections were held in 2018 and Congress leader Hardev Singh Laddi Sherowalia turned the tide, winning against the ex-minister’s son, Naib Singh Kohar.

Though there are murmurs of Sukhbir coming here, but my advice to him is that his position would further fall in the larger area of Malwa if he attempts to contest from Doaba, which has just 23 seats. But if he still wants to contest from here, I am ready to face him. I have served my voters with utmost dedication and they will support me wholeheartedly. —Hardev Singh Laddi, Congress MLA, Shahkot

While the Akali Dal has already announced candidates from five of the six seats it is contesting from Jalandhar, including Phillaur, Nakodar, Adampur, Jalandhar Cantonment and Jalandhar Central, it is only Shahkot, which still remains to be announced. The party insiders said Sukhbir Badal had already held a discussion on the matter with some prominent leaders of Shahkot and the impact that it could have.

The party workers of Doaba are reportedly quite upbeat about the decision as they have said that it could not just have an overall impact on the seats from the region but also on those from surrounding areas of Malwa, including Zira, Dharamkot, Ferozepur and Moga. They also said that if not Sukhbir, Harsimrat too could contest from this seat. If any of the two leaders contest from here, it surely will spell trouble for Laddi, who had so far been quite comfortably placed.

The party leaders also shared that announcing ticket for Kamboj leader Capt Harminder Singh from adjoining Sultanpur Lodhi seat was also a part of the same strategy as there is a good representation of Kamboj community in Shahkot too and the prospects from the seat could further increase. There also have been reports that ex-Finance Minister Balwant Singh’s son Rajanbir Singh could also be inducted soon in the SAD as a part of the same strategy.

Among those from SAD who have already been in race for the ticket from Shahkot include Dr Amarjit Thind, CD Kamboj and ex-minister’s grandson Bachitar Singh Kohar.