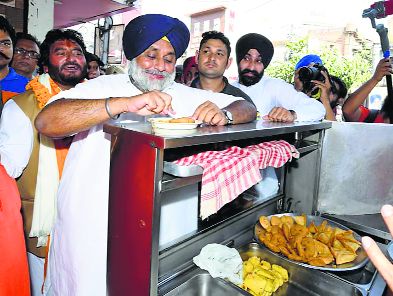 Hoshiarpur: A meeting of the Saini Jagriti Manch, Punjab, was held under the chairmanship of president Kulwant Singh Saini. It was resolved that the Saini community will contest the upcoming elections and if parties ignore them, the community would be fielding its own candidates. Sandeep Saini, founder, and Prem Saini, district president, were present in the meeting. Kulwant Singh Saini said the community was being discriminated against by every party. It was discussed and resolved that the party, which will give 18 to 20 seats to the Saini community according to its population, will be supported and the community’s votes will be cast in favour of that party. OC

The first programme of the party was listed for Birring village, where he was scheduled to pay tributes to freedom fighter and Babbar Akali Movement leader Kishan Singh Gargaj. He was slated to accompany Grewal at his first halt but the villagers sent across a message that they will not allow any political activity and hence the programme got cancelled and he confined his activities to the city only.

The SAD president was led by hundreds of SOI activists, who escorted him on bikes. In his jeep, Sukhbir visited Phagwara gate market, Band Bazaar, Bansanwala Bazaar and Model House road, where he interacted with locals, tasted some local food and obliged people with selfies. Taking his campaign to the complete grassroots level, he enjoyed the vadas of popular eatery of Narain Dass, savoured mathis at sweets shops and even got photos clicked with vegetable vendors.

His visit to Gurdwara Singh Sabha Model Town in the daytime with ex-MLA Brar got somewhat delayed as Brar’s political opponent and minister Pargat Singh was already at the gurdwara premises along with administrative officials. They were there for the inauguration of the gurdwara after its recent renovation. Badal also paid obeisance at Guru Ravidass Dham in the city. MLA Pawan Tinu and SAD chief Kulwant Singh Manan accompanied the party president. He also visited the residence of former Deputy Mayor Parvesh Tangri and former Chairman Punjab Gau Sewa Commission Kimti Lal Bhagat. Badal also appointed Parvesh Tangri as member of the Political Affairs Committee of the SAD. He had lunch at the residence of BJP councillor Manjinder Chatha. Though Chatha is learnt to be ill and was not at his place today, his family assured support for SAD.