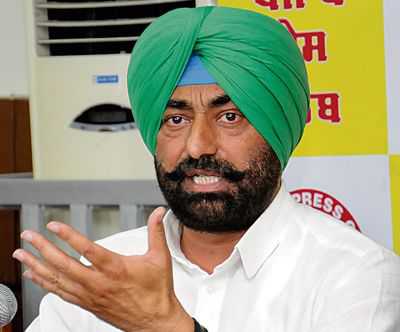 Bholath MLA Sukhpal Khaira on Monday called upon all non-BJP MLAs and MPs to come forward and support the agitating farmers, who are being severely victimised by the Central Government.

Khaira said he was aware of the fact that the farmer organisations had stopped political leaders from interfering in their agitation but that did not mean that the elected representatives of Punjab should remain mute spectators to the gross exploitation of farmers. Khaira said it was their moral duty to support and sustain the protests in Delhi for the genuine legitimate demands of the farmers.

Khaira said the way both the BJP governments at the Centre and in Haryana used harsh methods like water cannons, tear gas shells, heavy barricading etc, it only showed their undemocratic attitude and hatred for the farmers and Punjab. Khaira applauded the brave farmers and the youth of Punjab who by sheer will-power had managed to defy all impediments and reach Delhi and that too peacefully.

Khaira said the BJP government was treating the farmers with contempt as if they were enemies of the country despite the fact that the Punjabis have immensely contributed towards the inclusive development of the country since Independence. They have not only made India self-sufficient in food grain production but also defended the borders by laying down their lives. Unfortunately instead of rewarding the brave farmers, the BJP has turned revengeful and is inflicting cruelty upon them, said Khaira.