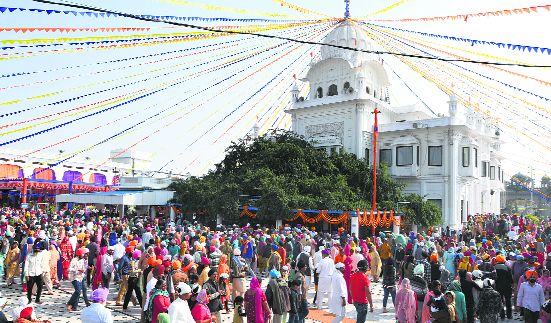 Sultanpur Lodhi: Unique pictures depicting pictorial images within Gurdwara Ber Sahib comprising the sacred Ber tree on the banks of holy Bein were distributed to the sangat on the occasion of the Parkash Purb of Guru Nanak Dev on Friday. Some pictures also denoted Bhora Sahib, where the guru used to meditate, Sukhasan Asthan, palanquin, nishan sahib, domes, architectural marvels. These also carried the verses from the sacred hymns of the guru. Prepared by eminent lawyer Harpreet Sandhu, these were launched after performing “Ardaas” by the gurdwara management and later distributed as “Prasad” among devotees. Also a very meaningful brochure showcasing the historical shrine Gurdwara Ber Sahib, where in Guru Nanak Dev left his footprints during his life span compiled by Harpreet Sandhu was also distributed among the devotees with aim to spread the teachings of the guru. TNS