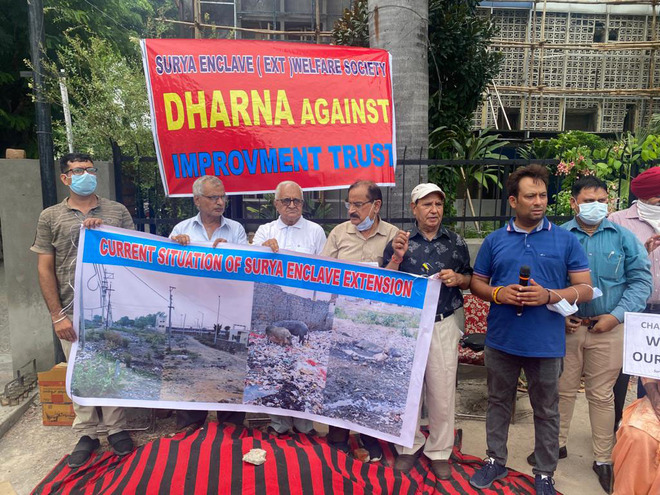 Members of the Surya Enclave Extension Welfare Society stage a dharna outside the Improvement Trust office in Jalandhar.

Plot holders of the Surva Enclave Extension today submitted a complaint letter to the Punjab Vidhan Sabha Committee today against the Jalandhar Improvement Trust for not providing possession of plots with complete basic amenities in the Surya Enclave Extension Scheme since 2011.

I had paid Rs 40 lakh in 2011 but haven’t received the posession so far. The area is a wasteland without power and sewerage. The C block is the worst. People were given land at the rate of Rs 17,000/sq yard. But it isn’t even worth Rs 1,700/sq yard. After a decade, the land and amenities promised to us elude us.

Most of the demonstrators being senior citizens, they also held a huge banner with pictures of a heavy garbage-littered road and wasteland overgrown with weeds with overhanging electrical wires titled, ‘Current Situation of Surya Enclave Extension’ - and raised slogans ‘Punjab Sarkar Murdabad’ and ‘Improvement Trust Murdabad’.

In the complaint, they mentioned that the Jalandhar Improvement Trust (JIT) had launched Surya Enclave Extension Scheme in the year 2011 and 2016 but till date, they have failed to provide possession to residents with basic amenities.

Elderly, Prem Walia, who came along with his wife, to participate in the dharna, said, “I had paid Rs 21 lakh for the plot, but so far, I have not received anything. It has been 10 years, but neither have I received the plot nor my money back. Every time we complain, we are sent back after being assured of action. We want the plot with proper living conditions or our money back with interest. “Bas Laare lai jande hai,” they said.

Protesters said till date, basic amenities such as water supply, sewerage and construction of roads have not been provided in the said area. They also said there are heavy overhead electrical wires over the plots in the C block and also alleged that there is an illegal encroachment on 45 ft and 120-ft roads, which connect the Domoria Flyover and Surya Enclave Extension.

The plot holders said despite repeated reminders to the Improvement Trust for a decade, the possession of plots with complete amenities as promised eludes the plot holders.

Many allottees, who are also senior citizens, have made full payments long time back towards the cost of the plots and have gone to various courts and give judgement in their favour. They also said some of them had also received their money back with interest.

The plot holders requested the Vidhan Sabha Committee to look into the matter and take strict action against the officers who have launched the scheme in 2011 and re-launched again in 2016.