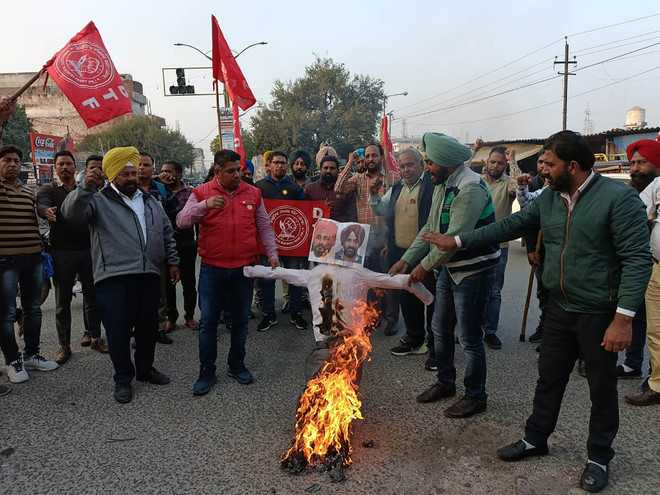 Teachers hold a protest at the bus stand in Jalandhar on Sunday.

Members of the Democratic Teachers Front burnt an effigy of the state government at the local bus stand in Jalandhar on Sunday. The teachers burnt an effigy of the CM Charanjit Singh Channi and Education Minister Pargat Singh at the main bus stand. The main demands of the teachers included completion of recruitments of all teachers, resolving grievances of all government teachers and bringing computer teachers under the ambit of the Education Department. They also protested against the lathicharge and the police action against teachers at various places.

They also participated in the morcha of TET Pass B.Ed unemployed teachers before starting their protest. Union member Vikram Dev Singh and General Secretary Mukesh Kumar said during the meeting of the Education Minister with the Sanjha Adhyapak Morcha, he had promised to provide better opportunities to teachers and cancellation of police cases against them.

He had also assured the clearing the orders for the regularisation of two of the teachers of the 8,886 teachers union and due addressal of their grievances.

The teachers issued a demand letter to the Education Minister and stated that if the state government fails to address their demands on a priority basis, they will soon hold a state-level protest rally in Jalandhar on December 8. — TNS