Courtesy online education, students and sellers of items of their workaday life are numbed 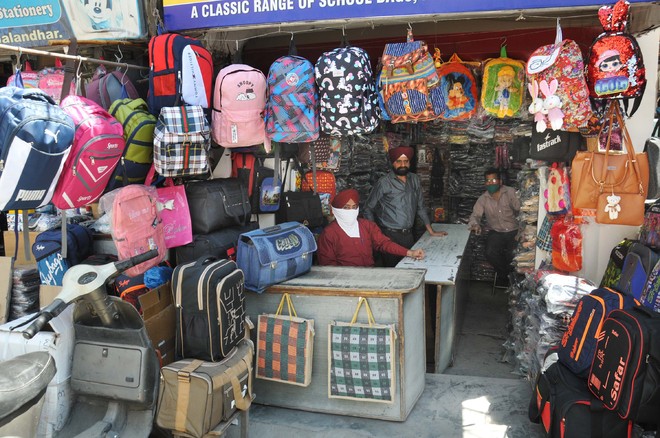 Stationery and school bag sellers wait for customers as there is slump in the market because of online education. Tribune photo: Malkiat Singh

There are no more carriages carrying school kids in the city. The stationery and school bags shops that would see a hustle-bustle of the students and their parents during this time are quiet and empty now. The charm of entering new classes has gone away with online education. The pandemic has taken away everything. The sellers say that the business has got badly affected as there is a 70-80 per cent dip in the sales of the stationery items, school bags, etc.

New school bags, new notebooks and its covers, writing names, roll numbers and class on the stickers, new uniform, this is what promoting to a new class meant for the school students, but not anymore.

There is a sense of despair among students as well as the sellers of their workaday items. Varinder Gandhi, who has a stationery shop at Mai Hira Gate in the city said, “There is more than 75 per cent dip in the business. Students would earlier come to us and would buy notebooks, pencils and pens, copy covers, and now with online education, they don’t need anything. There is hardly any sale.”

The shopkeepers were hopeful that unlike last year offline classes would be held this time, but to their horror, the schools are again shut.

Owner of VK Bags, Lalit, asks who will buy a bag now. “When nobody is going to the school, why would anyone even spend their money on school bags at this point of time? Everyone is suffering through the same condition. It’s a tough time,” he said.

Yuvika Aneja, who just entered Class VI, said she was missing her offline classes. “I used to buy new water bottles, would cover notebooks and buy new and pretty bags too. All that charm has gone,” she said.