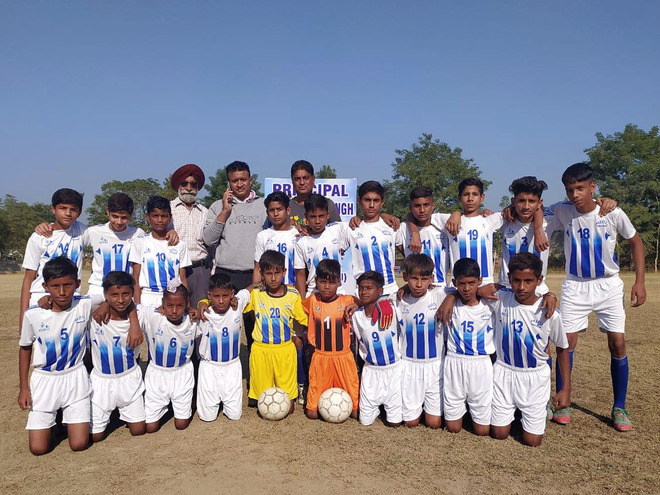 Principal Harbhajan Singh’s training centre at Barian Kalan in Hoshiarpur has become a haven for several kids belonging to economically weaker families where they get together and ‘kick’ their worries out. This is a football centre where talent of young children is recognised and is used for their growth.

The training centre was started with just one mission — to not let young children indulge in drugs and make them adopt sports instead and channelise their energy to achieve the mission. At present, there are as many as 45 players in the centre. Of these, the coaches have recognised 20 players who have the capability to perform at national level, so, the officials associated with the centre have approached the Punjab Football Association to register these players so that they could take part in the tournaments. The remaining 25 will be trained here to polish their skills.

Arjun (14) is one of the players who will be registered with the association. He has had a tragic life. After losing his father, he discontinued his studies in Class V and joined his mother in playing ‘dhol’ in marriages, to be a helping hand for his family. Now, he is a promising football player. Former BSF football coach Suraj Bhan Handa said every player who came at the centre is in dire need of help. “We have taken their responsibility. We will provide everything to them. I will make sure that Arjun continues his education. I will talk to some of the schools for his admission,” Suraj Bhan Handa said.

One doesn’t expect these small kids, who hardly have televisions at their homes, to even know of any international players. They don’t have enough money to afford a diet and football kit for them, but ask them who they adore in the game, pat comes the reply — Cristiano Ronaldo and Lionel Massey, etc.

Daughter of daily wagers, Sonia (10) is the only girl among boys in the centre. She studies in Class VI. ‘Ronaldo’ is an ardent fan of Portugese football player Cristiano Ronaldo and wants to become like him. Karan is another player whose mother is the only breadwinner of the house as she works as house help. He lost his father three years ago. Karan aspires to become an army officer for which he has been practicing hard by playing so that he gets fit for the job to be in the Army.