A resident of Surya Enclave, Aditi Mahajan has scored 690 marks out of 720 and hopes to get a seat in medical college of Delhi. She has secured 345 marks out of 360 in biology, 170 out of 180 in chemistry and 175 out of 180 in physics. Having scored 97.8 per cent in Class XII and 98.2 per cent in Class X from MGN School Urban Estate, Aditi has had a meritorious track record. 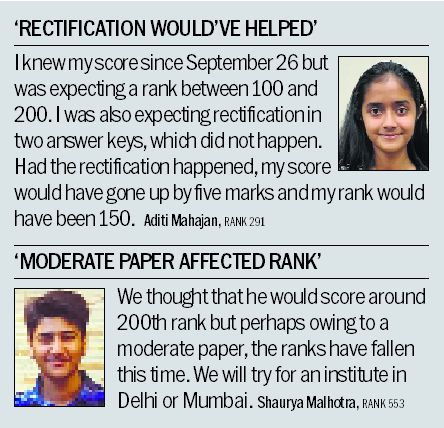 Her father Harish Mahajan is an advocate, while her mother Jyoti Mahajan is a chartered accountant. On her achievement, she said: “I knew my score since September 26 but was expecting a rank between 100 and 200. I was also expecting rectification in two answer keys, which did not happen. Two options could be correct in both these challenged questions. Had the rectification happened, my score would have gone up by five marks and my rank would have been 150. Nonetheless, my immediate priority will be to clear AFMC test of English and interview, which is expected in some days.”

She added that the long preparation time due to Covid helped her. “The last four months were really fruitful for me,” she said. She celebrated her success with her extended family at home today. “Yesterday, I was called at my institute in Chandigarh for celebrations. Later, my school also called me for celebrations. So, it’s today that we are celebrating it in the family,” she added.

Unlike Aditi, Shaurya’s entire family has a medical background. His father Dr Nidhi Malhotra is a child specialist and mother Dr Dipple Malhotra is a general physician. His elder sister Shreya Malhotra too is in the last year of MBBS in a government medical institute of Ahmedabad. Shaurya scored 681 marks out of 720 and a percentile of 99.956.

His mother said: “A prolonged practice session of 2.5 years really helped Shaurya score well. While I helped him with biology, his sister who was here because of the lockdown was a great support for him. Shaurya remained very consistent with his studies throughout.” Like Aditi, Shaurya too was expecting a better rank on the basis of his score.