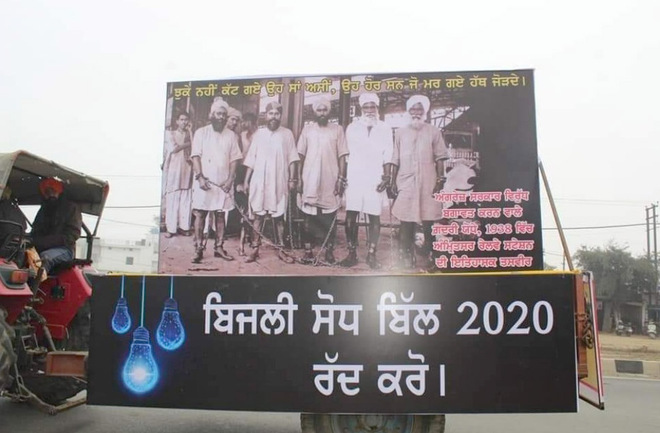 Tractors converted into interesting tableaux move towards the Delhi borders for the historic farmers’ protest on Republic Day. Tribune photo

During a protest by the Kisan Morcha in 1938, five Ghadar revolutionaries — Sardar Santa Singh, Sardar Sohan Singh Bhakna, Darshan Singh Pheruman, Fauja Singh and Karam Singh Cheema — fought for the rights of farmers. They were arrested and tied to chains at the Amritsar railway station.

The iconic picture also finds a spot on the tableaux.

Gurtej Singh from Mehatpur village, who is the grandnephew of Santa Singh — one of the Ghadarites — said: “The morcha has also been circulating information regarding the tableaux in detail. Farmers are sending out a clear message — repeal the three laws. Kheti Sangharsh Zindabad has been written on some of the tableaux.”

Holding the picture of five Ghadarites and walking on foot continuously for four days, Singh, from Mehatpur village had reached Singhu border to support the protesting farmers earlier this month.

Anganwadi workers are also going in hordes to Delhi borders and offering their services there. An anganwari worker, Krishna Kumari, from Jalandhar is at the border with several other workers. Nirlep Kaur, from Phillaur, said she came back from Singhu on Sunday and has been holding protests back in Phillaur too. “We are protesting at the toll plaza and supporting farmers,” she said.

Elaborate security in place for celebrations

Jalandhar: The Commissionerate Police have made elaborate arrangements to ensure foolproof arrangements for security during the Republic Day celebrations on Tuesday at the local Guru Gobind Singh stadium.

Bhullar said security had already been beefed up and the entire area around the venue of the event cordoned off by the police. The Commissioner of Police further said around 1,000 police officers had been deployed to keep a strict vigil.

He said CCTV cameras had been installed at the venue for keeping a regular check in and around the stadium. Security had also been enhanced in the city to check any sort of anti-social activity, he said.

Gurpreet Singh Bhullar said a round-the-clock vigil was being kept in the city for which various police patrolling parties had been formed. Likewise, he said senior officers had been instructed to conduct night domination exercise in the city to closely monitor law and order situation. Bhullar said a control room had been set up at the stadium to constantly monitor the situation. He said regular anti-sabotage checking was being done in and around the stadium, besides the deployment of firefighting and medical teams.

Meanwhile, he also held a meeting with senior officials at the stadium and took stock of the security arrangements at the ground level. He also passed on necessary directions to the officers/ officials for the smooth conduct of this mega event. — TNS

Jalandhar:Harkamal Preet Singh Khakh, Commandant 7th battalion, PAP, having the additional charge of AIG Counter Intelligence (Jalandhar zone), is among the eight Punjab Police personnel, who have been selected for the coveted Chief Minister’s medal for outstanding devotion to duty. CM Capt Amarinder Singh will confer the medal to them during the Republic Day function in Patiala. All eight police personnel have been selected for the award for displaying consistent performance at work. A decorated police officer, Khakh has been selected for the medal for his outstanding performance as AIG, CI (Jalandhar). He has been instrumental in busting various terror modules in the past few years and attempting to wipe out the gangster culture from the state. Khakh has also played a vital role in the campaign against drugs initiated by the Punjab Government. A big haul of heroin (50-kg) was seized by the police team led by Khakh at one go in Phagwara in 2009, which till date remains one of biggest recoveries by the Punjab Police till date. Khakh joined the Punjab Police as an Inspector in 1994 and was posted in various districts across the state as Inspector, DSP and SP before being promoted as SSP in 2016. He received the DGP’s commendation disc from then DGP, Punjab, Suresh Arora for his outstanding performance as SSP Amritsar (Rural). Since 2017, Khakh has been handling the dual charge of Commandant 7th Battalion of PAP and AIG, CI (Jalandhar zone). Other personnel to be awarded include DSP (city) Bathinda Gurjit Singh; DSP Harwinderpal Singh and Gurcharan Singh SSOC Amritsar and Mohali, respectively; DSP Arun Sharma and ASI (LR) Kashmir Singh from the STF; Inspector Binderjit Singh and ASI Pawan Kumar from Jehan Khalan. TNS