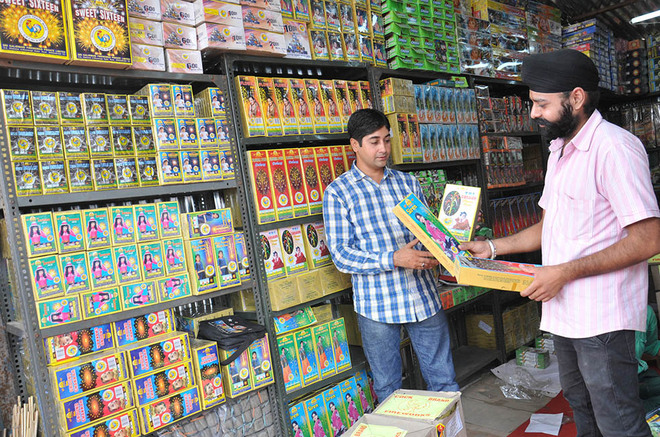 A day after the announcement of the ban on burning firecrackers in the most polluted districts of the state, including Jalandhar and Mandi Gobindgarh, the firecrackers dealers on Wednesday heaved a sigh of relief as the district administration on Wednesday allowed the sale of crackers.

A day after the announcement of the ban on burning firecrackers in the most polluted districts of the state, including Jalandhar and Mandi Gobindgarh, the firecrackers dealers on Wednesday heaved a sigh of relief as the district administration on Wednesday allowed the sale of crackers.

The ban order had reportedly left the traders worried as they were likely to suffer huge losses. In order to make an appeal to the government to lift the ban order announced when Diwali is round the corner, the traders also met North Constituency MLA Junior Avtar Henry.

Members of the Association of Wholesale and Retail Traders of Atari Market urged the MLA to allow the traders to sell crackers as they had already purchased the stock. Following which, the district administration, in an official order allowed burning and sale of crackers not only during Diwali, but also during Gurpurb, Christmas and the New Year.

However, no permission has been granted to sell firecrackers at places other than the designated places in Burlton Park. A complete ban on imported crackers in the form of toys and electrical items has also been ordered. DCP Jagmohan stated that action would also be taken against unauthorised storage and sale of firecrackers in view of Diwali.

The DCP further stated that there would be a complete ban on the import of firecrackers in the form of toys and electrical items. Moreover, people would be allowed to burst crackers on Diwali between 8pm and 10pm.

Temporary licences for cracker sale at 18 locations in Hoshiarpur

Hoshiarpur: The district administration, on Wednesday, issued 57 temporary licences for selling firecrackers at 18 different locations. Presiding over an event of allotting temporary licences through a draw at the district administrative complex, Deputy Commissioner Apneet Riyait made it clear that no one would be allowed to sell crackers at other than designated places in the district. Strict action will be taken against the violators, she added. Deputy Commissioner said as many as 14 licenses were allocated for the Dasehra Ground, Hoshiarpur, six in Zila Parishad market (Adda Mahilpur, Hoshiarpur), two in Roshan ground Hoshiarpur, three in Ram Leela ground Hariana, one place in Bullowal (open place) and Chabbewal, respectively. In Garhshankar sub-division, temporary licences were issued for six places in the Military Ground, Garhshankar, (opposite SDM office), three in Shaheeda Road, Dana Mandi, Mahilpur. In Dasuya sub-division, two licenses were allocated for Maharishi Valmiki Park, three for Block Samiti Stadium Dasuya and two for Garhdiwala Dasehra ground, two licenses for Khalsa College ground, three for Shimla Pahadi Park, Tanda, two licenses were allocated for Government Senior Secondary School in Tanda. In Mukerian, two licenses for Dasehra Ground Mukerian, Dasehra Ground, Hajipur, and Talwara, respectively. Deputy Commissioner said the shopkeepers would sell firecrackers only at said earmarked locations. She said shopkeepers could sell the crackers only from 10 am to 7.30 pm and the bursting time had already been fixed 8 pm to 10 pm. OC