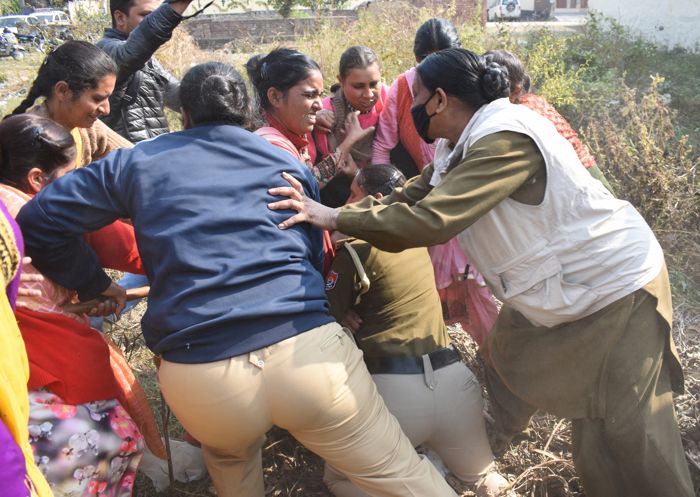 Scuffle like scenes were witnessed on Thursday also as teachers tried to bypass cops preventing them from reaching outside the house of Education Minister Pargat Singh. Photo: Sarabjit Singh

As election time is on and massive protests are being organised by the teacher unions seeking regularisation of jobs and salary hikes in front of the residence of Punjab Education Minister Pargat Singh in Mithapur here, a Tweet war has erupted between him and Delhi CM Arvind Kejriwal.

The issue seems to be taking a far more serious political turn with Kejriwal expected to arrive in Chandigarh on Saturday and meet the protesting teachers. The state government has all of a sudden come under a huge pressure because of the issue which has flared up all of a sudden.

It all started after Kejriwal had on Tuesday given an eight-point guarantee for the teachers, including promising them recruitments and promotions, Pargat last evening took to Twitter to tell him: “Arvind Kejriwal ji, there is already a revolution going on in education in Punjab. It is another matter that you missed it. It is understandable for a Delhite whose interest in Punjab is aroused only around elections.”

Pargat, who ahead of 2017 Assembly polls was at one point of time expected to join AAP along with Navjot Sidhu, immediately shot off five more tweets: “Punjab topped the country in school education in National Performance Grade Index. Delhi came sixth.” He even mentioned the five parameters on which Punjab was ahead of Delhi.

Soon after, came his third tweet in which he talked of pupil-teacher ratio in Punjab being 24.5: 1 as compared to 35:1 in the national capital. His fourth tweet mentioned that his comparison of schools in Punjab and Delhi is not based on his personal opinion but on the facts coming from a national survey.

His fifth one reads: “Punjabis have full faith on our government school system. In the last four years, the enrolment in pre-primary classes have risen from 1.93 lakh to 3.3 lakh.” The last one said: “You need not worry about our transfer policy of teachers. It is one of the best and the most transparent transfer policies in India which is fully online. Teachers get stations of their choice sitting at home and it is done once in a year.”

Meanwhile, scuffle like scenes were witnessed even today as teachers tried to bypass cops preventing them from getting outside the house of Pargat Singh. Union leaders Sandeep Gill, Sukhwinder Singh Dhilwan and Amandeep Sekha said the minister had been unable to keep his assurances for the past almost a month.

If advertisements regarding 9,000 posts of social studies, Hindi and Punjabi are not released by November 28, then the minister’s residence would be gheraoed once again, they said. Meanwhile, Munish Fazilka and Jaswant Ghubaya continue to stay put atop the water tank in Jalandhar since October 29 onwards. A simultaneous hunger strike also continues by five other unemployed teachers.

‘We will meet Delhi CM on Nov 27 in Chandigarh’