Two of vehicle thieves' gang from Nakodar arrested with 3 motorcycles : The Tribune India

Two of vehicle thieves' gang from Nakodar arrested with 3 motorcycles

Involved in robberies on Jalandhar-Nakodar highway 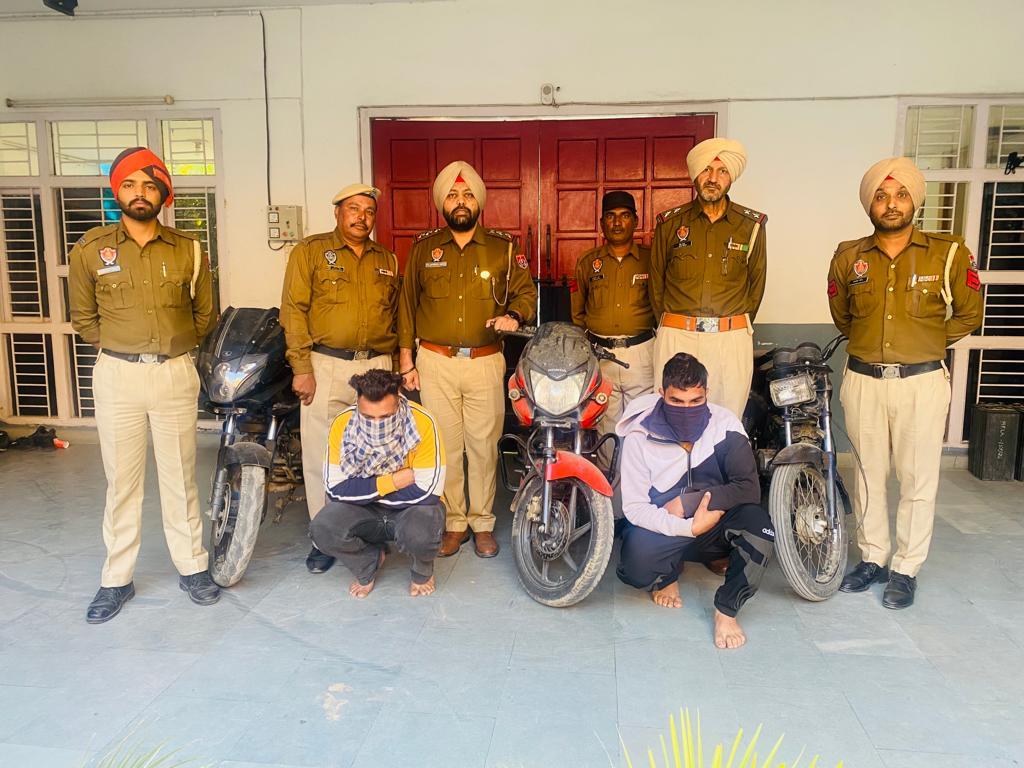 The accused in the custody of Jalandhar rural police. Tribune photo

The Jalandhar rural police of the Nakodar police station claim to have busted a gang of vehicle thieves with the arrest of two of its members. Both the arrested gang members are from Nakodar. The duo was held with three stolen motorcycles and sharp-edged weapons.

Phagwara: The Nakodar Sadar police have booked two unidentified miscreants on the charge of lifting a motorcycle. Avtar Singh, a resident of Chania village, complained to the police that he was returning from Lohian Khas and had parked his two-wheeler at Mussewal village on the Milesian-Nakodar highway on November 12 from where two unidentified miscreants stole it. Police said a case under Section 379 of the IPC has been registered against the unidentified accused.

Phagwara: The police have arrested a drug peddler on the charge of selling heroin. Investigating Officer (IO) Pippal Singh said that 50 gram of heroin was recovered from the possession of the accused, identified as Gurjit Singh alias Jassi, a resident of Madhe Pur village under Sidhama Bet police station in Ludhiana. Police said a case under the NDPS Act has been registered against the accused at Mehat Pur police station. OC

The rural police said the gang members had been carrying out robberies and snatchings on the Jalandhar-Nakodar highway.

Following a tip-off, the police nabbed the duo on the road leading to Sahim village. The duo has been identified as Amandeep Singh and Sukhjeevan Singh, both residents of Nakodar, Jalandhar.

With the arrest, three motorcycles — all three without number plates — were seized. Sharp-edged weapons like a khanda, a kirpan and an iron pipe were also seized from their possession.

A case was registered against the two under Sections 379-B (snatching and use of force), 34 (Acts done by several persons in furtherance of common intention) and 411 (dishonestly receiving stolen property) of the Indian Penal Code at the Nakodar police station on November 26. More details are awaited as a thorough investigation is under way.