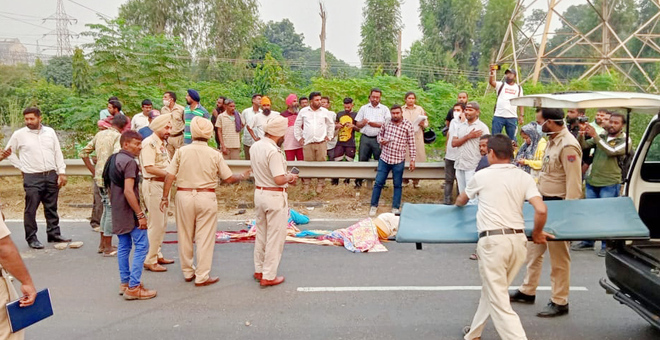 Police and family members at the accident site after two women, Amarjit Kaur and Anita Sharma, were crushed to death near Chuggiti bypass in Jalandhar on Thursday.

Two women were crushed to death by a speeding truck today at 5 pm. The accident took place at the Chuggiti bypass, on the Jalandhar-Amritsar Highway.

The women were reportedly heading towards the PAP chowk, when the vehicle hit them from the rear side. As per the police, the women were travelling on a two-wheeler.

The ACP said the women fell on the road due to the collision, and sustained fatal injuries on their head and neck. An ambulance took the bodies to the civil hospital for post-mortem.

The police have nabbed the truck driver, who had left the spot immediately, near the PAP chowk. The truck driver has been identified as Satnam Singh, a resident of Kadian, Gurdaspur. The cops have seized the truck. A case has been registered against the driver at the Rama Mandi police station.

This is second such fatal road accident reported in the past three days. On Monday, a woman had died on the spot, while one sustained grievous injuries, after they were hit by a car on the Jalandhar-Phagwara highway. As per the CCTV footage, the women were crossing the road when the mishap occurred.