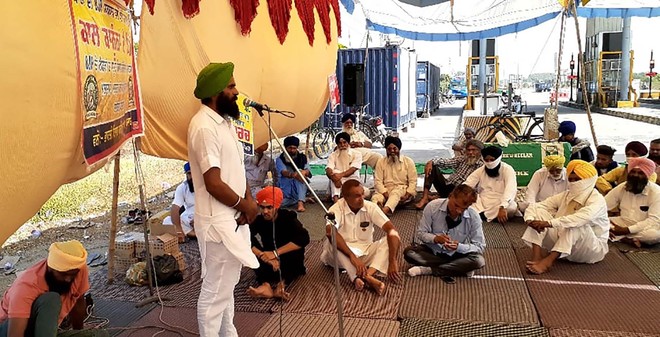 It has been a week since farmers in Nawanshahr have been protesting against the farm laws at Behram Toll Plaza. Davinder Singh, one of the farmers who is leading the protest under Bharatiya Kisan Union, Doaba, in Nawanshahr, said after the talks failed with the Centre, they would intensify their dharna on the site. “We are not going to sit idle. We have protested and will continue to do so in the coming days, too, until the laws are cancelled. We have our kids, who wait for us back at home and ask us as to why we remain outside for so long. We have nothing to tell them. We just want their future to be secured. But the Centre’s attitude is very negative towards the situation,” he said.

A farmer was charged Rs2,500 in Mirpur Jatta village for burning paddy straw. Chief Agriculture Officer Dr Raj Kumar said after the instructions of SDM, Nawanshahr, a team inspected the fields of the farmer and found that he was indulged in stubble burning. Thus, he was fined. After this, the SDM asked farmers not to burn stubble, as they would also have to suffer with the same punishment in future. Teams formed by the district administrations have been checking fields almost every day.

While the authorities in Jalandhar were still not sure on the number of schoolteachers to be present in schools, the Nawanshahr District Education Officer said 50 per cent of the school staff would remain present from October 15. He said: “DC Nawanshahr has issued guidelines that 50 per cent of staff will attend the school and apart from this, online classes will also continue.” He said detailed instructions might come from the Education Department, but for now, they would continue with the orders passed by the DC.