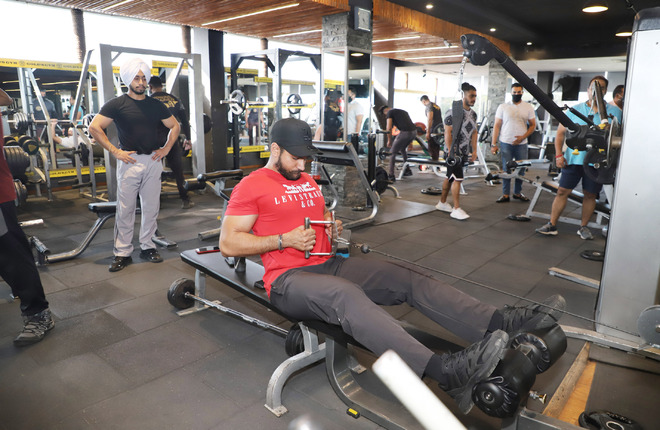 Back to normal: In another step towards the return of normalcy in public life, eateries and gyms opened in Jalandhar with 50 per cent capacity on Wednesday after the state government further eased the lockdown norms

A day after the state government announced some relaxations on Covid curbs, almost all gyms and most restaurants opened in the city today.

The gyms and dining provisions at restaurants had been shut for almost the past two months since the second Covid wave had hit the region. The Jalandhar Gym Association, which has nearly 50 members, had been repeatedly lodging their protest demanding that they be allowed to open gyms to help the people maintain their fitness levels even in Covid days.

Vikram Dhiman, owner of Gold’s Gym at Model Town said: “Our clientele had been calling us for the past two weeks asking us when we will open. As we finally opened today, there were nearly 150-200 members who came over and started their routine. We otherwise have more than 500 visitors a day in pre-Covid times.”

As the gym started, the owner said he announced a few dos and don’ts as precautionary measures, apart from routine practices of thermal scanning, sanitisation and social distancing. “We have about 10,000 sq feet space and we have formed one-hour slots for 50 members at a time. The members will be able to enter only in their slot time with their own water bottles and towels. We have not opened sauna, steam and shower facilities yet. We have also not started any group activities like aerobics, bhangra, dance classes etc,” he said adding that slots would start at 5 am and would go on till 8 pm for maximum spacing and safety of all members. He also showed the glass partition which had been done between all treadmills and cardio machines for the same reason.

Meanwhile, most dhabas and restaurants opened their dining facilities for public today. While earlier, most of them had been engaged in home delivery, they happily welcomed the new customers to sit and savour their food today. The response from public, they said, was not very enthusing at least on first day.

Janak Raj, who owns Punjabi Dhaba, said: “We finally opened our dhaba for customers today. We only had been packing food for pick-up service. The response today was okay as people are still scared to come out and have food. They are still preferring to get it packed and take it home.”

Some owners of restaurants are still awaiting more relaxations so as to start. As Rajan Chopra, owner of hotels and restaurants in the city, said: “We have so far only opened our coffee shop for seating purposes. Since there still is restriction of curfew at 8 pm, people cannot take dinner so early. So, we may open our restaurants for dining facility from July 1 onwards.”