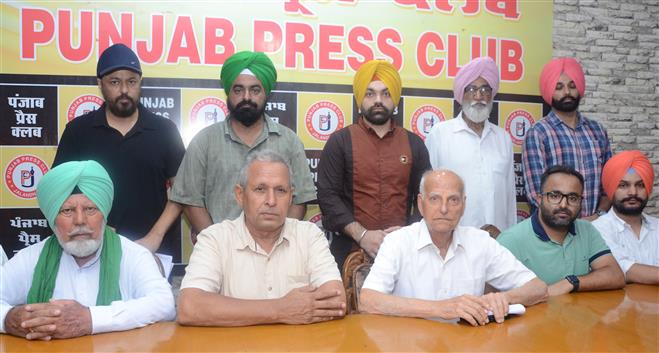 Traders and residents of Urban Estate I and II address mediapersons in Jalandhar. Tribune photo

The issue of garbage dumps at several areas of the city has been troubling the Jalandharites. Every day residents of several colonies are raising the matter with the Municipal Corporation, but to no avail. Heaps of garbage around residential areas and eatery joints are evoking anger among the people.

Business, health will take a hit

There are a number of restaurants, hospitals, commercial establishments and a petrol pump near the proposed dump. Once it is built, customers will avoid the market because of stench and filth. There are a number of schools in the vicinity as well. The dump will become a health hazard . — Members, Market Assn, Urban Estate-I & II

A few days ago, residents of Model Town raised the garbage dump issue and the related problems in their area. Today, residents from Urban Estate I and II along with market association held a press conference on the same issue. Residents alleged the Punjab Government had proposed setting up of a garbage dump in the middle of Urban Estate II market. “If the area becomes a dumping zone, it will become a nuisance for the whole locality and affect thousands on a daily basis,” said Sartaj, one of the residents.

Residents said a representation was given to MLA Pargat Singh during the tenure of the previous Congress government. The market association along with the residents had met him a couple of times to let the administration know of the public resentment against the move. A dharna was also staged last year against the proposal.

“The land which is in question belongs to the Waqf board where the government is proposing to set up a dump. Even the Waqf board is against this move and they have moved court against the Jalandhar Municipal Corporation (JMC),” claimed residents.

Residents and the market association suggested that the prime land where the MC wants to set up a dump can be used to build a park, a government dispensary or a mohalla clinic. “We have also come to know that the previous governments had allocated funds to build a fire station at the same spot. Even Rs 8.5 crore was also received for it, but still the corporation is adamant on setting up a dump in the middle of the market,” they rued.

The members of the association and residents have also given ultimatum to the Municipal Corporation. “If the authorities decide to go ahead with this move, we will form a human chain and stop anyone and everyone who tries to throw garbage at the above site. We won’t let the government play with our livelihood and our lives,” they said.