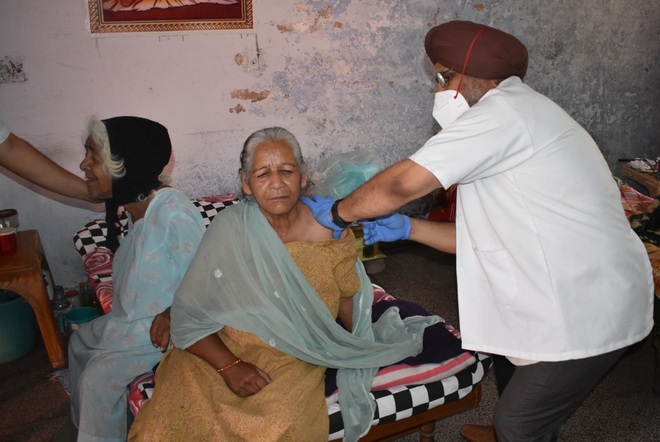 Expanding the ambit of ongoing Covid vaccine, the district administration on Friday kicked off the special vaccination camps in all grain markets in the district from local Dana Mandi Rahimpur to administer vaccine to all stakeholders during the procurement season.

Deputy Commissioner Apneet Riyait said a team of Health Department led by District Health Officer Dr Lakhvir Singh conducted a special camp on the first day of the drive in Dana Mandi Rahimpur, where as many as 60 beneficiaries including farmers, who were there to get their crop procured, arthiyas, labourers and other eligible persons were vaccinated. Riyait also pointed out that this campaign would remain functional in other mandis too for the facilitation of beneficiaries in sub-divisions Mukerian, Garhshankar, Dasuya and its respective jurisdictions.

Giving details of the ongoing vaccination, the Deputy Commissioner said that more than 1.65 lakh beneficiaries had been administered Covid vaccine so far and on Friday 9,494 beneficiaries were inoculated in a single day. She said that all sectors were being covered so that the eligible beneficiaries could be vaccinated as soon as possible.

The Deputy Commissioner also stated that all inmates of Old Age Home at Ram Colony Camp were vaccinated by holding a special camp. She also exhorted the other eligible people to come forward for vaccination without any hesitation and fear as it was must in the present circumstance amid surge in cases.