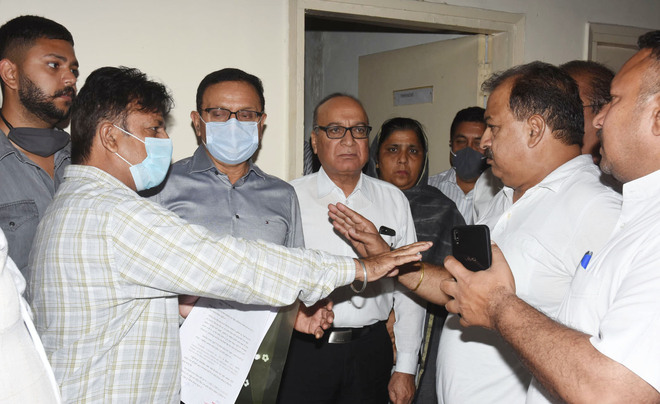 MC members hand over a memo to the ad hoc committee chairman in Jalandhar. Tribune photo

Members of the Vidhan Sabha committee have advised the Municipal Corporation (MC) to waive water bills of residents amounting to Rs75 crore, which are lying pending for several years.

“The residents have balance payments of 5-10 years, but it has been decided in the meeting that the long-pending water bills of those who will pay the proper amount of water bills regularly for a year will be waived,” a source from the meeting said.

During the meeting, the issue of the one time settlement policy (OTS) was also raised. It was discussed that the buildings that had got built 10 years ago, but were unauthorised were being targeted, so until the OTS scheme comes into the place, the MC should not seal any of the buildings or take any action. It was decided that new buildings should not be allowed to get constructed, but also no action should be taken against old ones.

Another issue of Guru Gobind Singh Avenue was also taken up, where resident are reeling under the problem of waterlogging and clogged sewers. “Neither MC nor the Sewerage Department and Improvement Trust are working to resolve the issue, everyone is passing the buck to each other,” the source said.

Delay in getting map approved of the residential properties was another problem being faced by the residents which were highlighted in the meeting.

“It takes at least two years to get a colony approved. The delay forces colonisers to carve out unapproved colonies out of frustration. This is another issue that was raised because if the formalities are complete, then the approval must be given within 15-20 days,” the source associated with the committee said.

Memo given to panel members

The All Adhoc Committees Chairman of the MC gave a memorandum to the Chairman of Vidhan Sabha Committee in which it was mentioned that several works were being carried out under the Smart City Project about which the MC councillors don’t even know. “So, whenever work is not done properly, area residents blame councillors. So, it is very important that councillors must also be told regarding the works being done,” the memorandum reads.

Another issue mentioned in the memorandum is to waive the property tax of commercial and residential properties because the Covid situation has impacted everyone’s business and work.

Jaspal Kaur Bhatia, Councillor, Ward No 45, also handed over the memorandum to the committee and she asked members to conduct an inquiry into the works done in the city in the last two years. She said that the MC funds were being wasted in the name of doing development works. “There are several scams that will unearth if inquiries are marked in this matter,” she said.