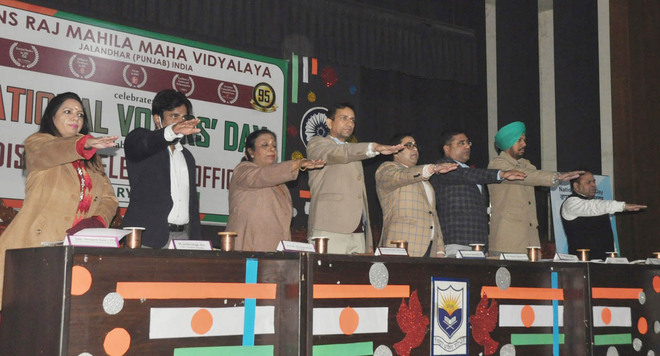 Jalandhar: DC Ghanshyam Thori exhorted youngsters to exercise their franchise judiciously for strengthening democracy at the grassroots level. Addressing the gathering here at the local HMV College during a function to commemorate National Voters’ Day, the DC, accompanied by ADC Vishesh Sarangal, Jasbir Singh, ACA PUDA Anupam Kler, said maximum participation of voters in democratic process was the key for formation of a good government. Thori said thrust must be laid on sensitising people, especially youngsters, about the need for exercising their franchise by rising above the parochial considerations of caste, colour, creed or sex. He categorically said strengthening democracy at the grassroots level was a mammoth task and the youth must contribute enormously to this national service. The DC said foolproof voter lists were the basis of a democratic process and were infact the criteria for assessing the performance of a democratic nation. He said the Election Commission of India (ECI) had successfully played a role in formulating and revising the electoral rolls time and again, without any obstacle, due to which many advanced and developing nations were replicating India’s model of democracy. The DC said the celebration of the National Voter’s Day had its own significance as it has assured more and more participation of youth in the democratic process. TNS

Jalandhar: In a major initiative aimed at ensuring protective and comfortable stay for working women, the Punjab Government is set to establish the first working women hostel in Doaba to be constructed at a cost of Rs 4.5 crore. Jalandhar Deputy Commissioner Ghanshyam Thori said to ensure women empowerment, the state government had been making stupendous efforts for constructing a working women hostel in the city. He said this hostel was required to ensure quality living atmosphere for the women who were working in the city after coming from other parts of the country and state. Thori said acceding to the demand of the district administration, the Ministry of Women and Child Development has given its consent to construct the working women hostel in the city. The DC further said the multi-storey building would come up at Gandhi Vanita Ashram, Kapurthala road, and would house 80 working women besides 20 day care children. He said the building would come up at an area of 36,000 sq feet and first instalment of Rs 1.36 crore for the project has been issued by the ministry. Thori said the total expenditure for constructing the building was Rs 4.5 crore, which would be borne by the Union, state government and implementing agency in the ratio of 60:15:25, respectively. Meanwhile, the DC said the work on the project would start soon and would be completed within the coming 24 months. He said working women hostel was a sub-scheme of the Centrally-sponsored umbrella scheme ‘Mission for Protection and Empowerment of Women’. TNS

Jalandhar: DC Ghanshyam Thori on Monday issued the first certificate under the Punjab Right to Business Act — 2020 to Tushar Jain for setting up an auto manufacturing unit. The DC, accompanied by ADC (D) Vishesh Sarangal, handed over the certificate to Jain for starting an auto-manufacturing unit in Jandu Singha after he applied at the Business First Portal. The DC said under this Act, all NOCs related to set up a new enterprise would be completed within 15 days after applying at the ‘Business First Portal’. All formalities and NOCs related to the new business/ business start-up would be awarded through this single medium in a record time, he said, adding that the Department of Industries and Commerce had taken this new initiative to promote the business in the state besides providing ease of doing business with the required approvals. General Manager DIC Deep Singh Gill urged industrialists to avail the benefits of ease of doing business initiatives for various regulatory clearances and fiscal incentives through Business First portal of the Department of Industries and Commerce, Punjab. TNS