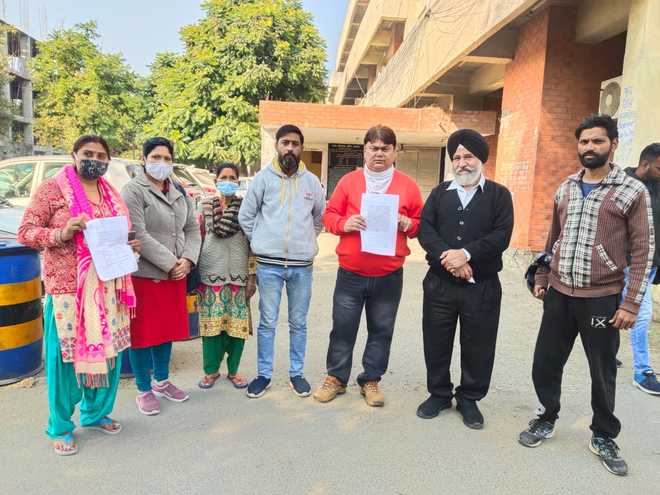 BJP councillor Varesh Mintu with victims of the financial fraud.

Hundreds of low income group residents of Tilak Nagar, Dashmesh Nagar, Uday Nagar and other localities of the city, who had invested with a local finance company, have alleged that they have been duped of all their life savings. Unable to trace any of the three directors of the company, Jeevan Prabha Nidhi Ltd, for the past few weeks, they have finally lodged a complaint against them with the Jalandhar Police Commissioner.

Led by BJP councillor Varesh Mintu, the victims said 500-700 people had invested in the company after an assurance that their money would be doubled in four years. He said most of the victims were domestic maids who had invested their hard earned savings with a hope of good returns. Revealing details, he said the company based at Iqbal Plaza in Adda Basti Sheikh was owned by three directors, including two women – one from Preet Nagar on Ladowali road and another from Mohalla Manjit Nagar of Basti Sheikh, and a man from Basti Sheikh.

Mintu said the victims had been trying calling on their phone numbers, too, but these were lying switched off. “We went to their places and found them missing. Their relatives at home said they had no clue as to where the directors had gone. So, we finally lodged the complaint with the police,” he said adding that they had been told that an FIR would be lodged after a preliminary investigation into the matter.