‘We can have one power... and that is the political power’ : The Tribune India

On October 27, 1951, Dr Ambedkar paid first visit to the district and exhorted Dalits to stand up for their rights 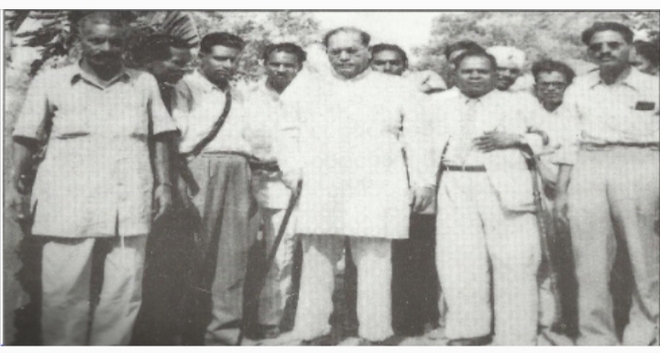 “Now coming to the ensuing general elections I appeal to the Scheduled Castes people to treat the elections as a struggle for life and death and work in that spirit during the coming months. We must use all our strength to get our candidates elected. Man derives strength from the number of people behind him and from the wealth he possesses. We are a minority, we are not wealthy. Our population in an average village does not exceed 5 per cent of the total population. Owing to poverty we are unable to have the authorities on our side. But we can have one power and that is the political power. This we must win. Armed with this, we can protect the interests of our people.”

It was with this huge exhortation to Dalits that Babasaheb Bhimrao Ambedkar addressed a gathering of lakhs on his first visit to Jalandhar on 27th October, 1951. Almost 69 years later, Dr Ambedkar continues to remain a popular icon among the populace of India and the Dalits in Punjab. However, more or less the same questions continue to haunt the downgraded community.

The city bears countless testimonies to its Dalit and Buddhist legacy. While several Buddhist viharas erected to commemorate his ‘pravartan’ (conversion) to Buddhism dot Doaba, the Jalandhar-based Ambedkar Bhawan also bears testimony to the memory of his visit. Lahori Ram Balley formed the ‘Ambedkar Bhawan Trust’ in 1972 to take care of this property and it continues to act as a centre of Ambedkarite legacy under its current set of trustees.

Ambedkarite and scholar Baldev Bhardwaj, says, “Dr Ambedkar exhorted Dalits in the middle of what were huge fields then. On October 27 he addressed a gathering at Ramdaspura. The next day he addressed at DAV College, Jalandhar. To perpetuate his legacy; where he delivered his speech, Ambedkarite scholar, author and an associate of Dr Ambedkar, Lahori Ram Balley, as well as Karam Chand Bath bought a piece of land, in the name of Ambedkar Bhawan before 1963, by collecting a rupee from people.”

Bhardwaj adds, “After Jullundur (as it was then called), Dr Ambedkar subsequently visited Ludhiana and Patiala. A portrait of the 1951 visit with the Ambedkarites commemorates Babasaheb’s legacy.”

LR Balley, Founder Trustee, Ambedkar Bhawan and Editor Bheem Patrika (a magazine started to mark the legacy of Dr Ambedkar), says, “In the portrait he is seen flanked by Seth Kishandas Kler, then (1951) president of the Schedule Caste Federation (SCF), Punjab, who brought him to Jalandhar from Raja Sansi and accompanied him. He remained MLA with SCF till 1937-46. During that visit, I was in Agra on duty regarding the same elections.”

When Dr Ambedkar was critically ill on 30th September, 1956, Balley made a promise to him to spread the Ambedkar Mission throughout his entire life. On the day of Mahaprinirvan of Babasaheb Dr Ambedkar on 6th December, 1956, he resigned from his permanent government job.

Babasaheb said: “When I came from England after getting my degree in Doctor of Philosophy, there was nobody in India with such qualifications. So when I reached Bombay and settled in the Mohalla from where I had gone, the Bombay government after a great difficulty found my place, as nobody knew where I was residing – it was such an unpopular place – and approached me to accept the post of Professor of Political Economy. I refused the offer. If I had accepted, I would have been at least the Director of Public Instructions. I would have got three or four thousands of rupees per month. I refused it because I had a great feeling for the service of my community which I could not have done remaining in that service. A government servant, you know, cannot serve his community as he has to go according to the wishes of the government and follows their flawed, self-centered policies.”

“I got birth in an Achhut community and will die for it and the cause of my community is supreme to me. I did not join any party or body. I remained independent while in the Congress government, I remained true to my people. Many people thought that I had joined the Congress as I had accepted the Cabinet ministership of the Congress. The critics pointed out that Dr Ambedkar had joined Congress and why the SCs should continue to remain in the Scheduled Castes Federation. I explained about it at Lucknow that earth and stone are two different things and they can never mix together. Stone will remain the stone and the earth will remain the earth. I am like a rock which does not melt, but turns the course of rivers.”