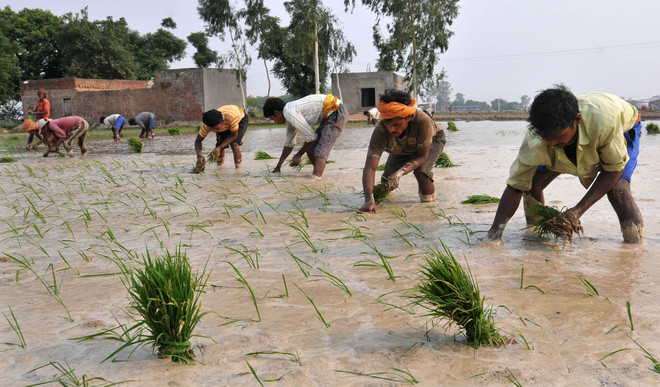 It has been 13 days since the paddy sowing season kicked off.

Quite against the tall claims of the government of providing an eight-hour promised power supply, farmers in many parts of the district claimed to be getting the electricity for only five-six hours a day. The unscheduled power cuts amid kharif season have been subsequently delaying the sowing of paddy. Apart from this, the farmers also complained of non-functional helpline numbers of Punjab State Power Corporation Limited (PSPCL).

Forget about supplying power to irrigate our fields, even the domestic supply remains disrupted throughout the day. The government had assured to provide uninterrupted power supply between 10 pm and 6 am, however, due to unscheduled power cuts, the timings have reduced from 11pm to 5.30 am.

It has been 13 days since the paddy sowing season kicked off this year across the state. Considering the consumption of water required to prepare the fields for sowing the crop, the PSPCL officials had assured to provide minimum eight hours of continuous power supply to the farmers. However, the water pumps run dry during the scheduled time. Rana Singh, a farmer at Lidhran village said, “Forget about supplying power to irrigate our fields, even the domestic supply remains disrupted throughout the day. The government had assured to provide uninterrupted power supply between 10 pm to 6 am, however, due to unscheduled power cuts, the timings have reduced to 11pm to 5.30 am. Even during these six hours, supply remains disrupted.”

Before the onset of monsoon, water pumps are used to irrigate the fields where paddy saplings are transplanted. The paddy needs standing water for growth, but cultivators are finding it difficult to plant saplings. Sometimes, finding labour in the early hours also becomes a tiring task.

“On one hand, the Agriculture Department is asking us to go for direct sowing of paddy, on the other, the marginalised farmers don’t even get the basic requirements. Farmers do not ask for anything, but need power supply so that they can produce grains, which is also not given to them,” rued Palwinder Singh alias Pala, another farmer who wakes up at four in the morning to prepare his fields. The pumps can’t be run many a time due to outages.

Farmers are a distressed lot but the Agriculture Department and the government is doing nothing. The agriculture unions also confirmed that they have been receiving complaints from farmers on frequent power cuts. “If the power supply snaps during the paddy plantation time, the electricity board should ideally compensate for it the following day by giving additional hours of power equal to the time of cut imposed the previous day. Unfortunately, the electricity board workers don’t even come to repair the faulty transformers on time,” said Balwinder Waraich, a farm leader.

While sources inside the Electricity Department claimed that due to the unfulfilled demands, the department has shortage of workers, the PSPCL officials didn’t respond even after several attempts.