Without mask? Get ready for Covid test at nakas 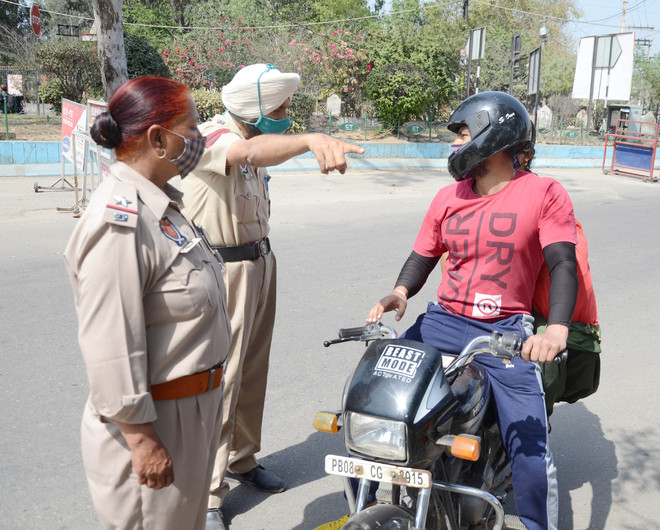 Acting tough To take strict action against violators, the administration on Saturday set up joint nakas of the Police and Health Departments at various locations in Jalandhar. Photo: Sarabjit Singh

Taking strict action against offenders of Covid norms, the administration on Saturday installed joint nakas of the Police and Health Department at various locations in the district. The development comes amid unexpected rise in Covid-19 infections and surging fatality rate.

On Saturday, too, as many as 390 people were found infected with the deadly virus and 12 patients succumbed to it. With this, the Covid case tally has mounted to 25,581 and with 810 fatalities, the total death count is shortly going to touch the 1,000 mark. In the month of March only, 3,884 people have tested positive for the virus so far and 105 people lost their lives.

As the situation is worsening every day, new measures are being adopted by the administration to contain the Covid spread. Following the direction of Deputy Commissioner Ghanshyam Thori, the joint nakas were held at 16 locations across the district.

A mobile team of 4-5 health workers along with five cops were asked to do the RT-PCR tests of those not adhering to Covid rules. Consequently, violators of the government protocol were made to undergo compulsory Covid-19 testing at these nakas.

Surprisingly, people who were wearing masks and following social distancing were also forced to undergo the Covid test by the police. Auto-rickshaw drivers and passengers sitting inside were also not spared. While around 30-40 tests were conducted at every such location, Commissioner of Police Gurpreet Singh Bhullar said around 379 violators were made to undergo the compulsory Covid tests on the spot on Saturday. The health workers were seen taking the swab of locals and collecting their samples for the RT-PCR tests. Those who were tested, would receive their reports on their registered mobile number, a health worker said.

Drive initiated against violators in Hoshiarpur too

In order to ensure effective implementation of Covid health safety protocols, the district police on Saturday initiated a drive against those violating the stipulated guidelines by taking them to Police Lines Hospital for RTPCR test. Senior Superintendent of Police Navjot Singh Mahal informed that as many as 310 challans were issued for not wearing masks in the last 24 hours, besides registering seven cases for violating night curfew.

He said the district police would intensify the drive against those persons who were found flouting Covid appropriate behaviour. He appealed to the people not to violate the health safety protocols. On Saturday, SP RPS Sandhu and DSP Madhvi Sharma, on the directions of the SSP, reviewed the drive against the violators.

Vaccination Drive: As many as 43,492 doses have been administered so far in the district. District Immunisation Officer Dr Seema Garg said 43,492 doses of Covid vaccine had been administered in the district so far. She said 7,656 health care workers received the jabs of the first dose of vaccine while 3,219 inoculated with second dose. In frontline workers, 5,830 got the first dose and 2,679 received the second dose whereas 23,808 above 60 yrs and above 45 years with co-morbidities were vaccinated.