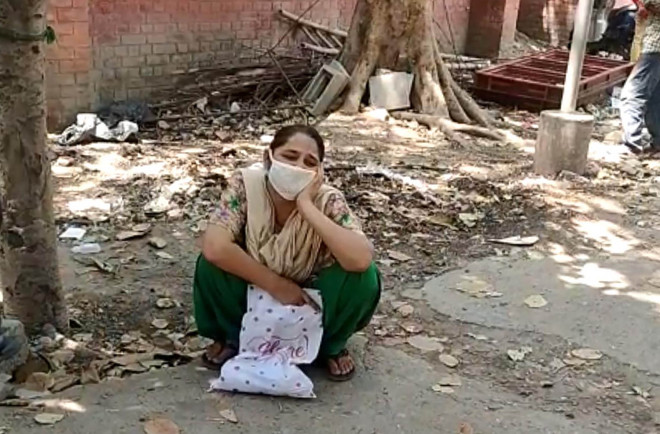 The distraught woman outside the Civil Hospital on Friday. Tribune Photo

The lackadaisical attitude of the Civil Hospital administration came to the fore when a woman on Friday alleged that she was made to wait for the body of her deceased husband for nearly three days. Though the body had been kept in the mortuary, it was not handed over to her in the past three days.

Suman, a resident of Adda Hoshiarpur area, said, “My husband Jatinder Singh passed away at around 9.30 am on May 5. He had fever and was complaining of uneasiness. I brought him to the emergency ward, but doctors told me that he was no more. I tried to get his body to perform the last rites but to no avail.”

She alleged that she had been spending hours for the past two days shuttling between the emergency ward and the mortuary requesting doctors that she should be handed over her husband’s body but no one was paying a heed to her requests. Asked if her husband had died due to Covid, she replied, “I really do not know. He died even before he could be tested and treated for anything.”

The helpless woman narrated her saga, “I think the doctors got irritated as my 26-year-old daughter came with me for getting the body n Thursday. She was disappointed at the state of affairs and vent out her ire against the doctors. Since then, I am facing more problems. My daughter is in depression. I have given her sleeping pills today so that I can come here.”

As the matter went viral, mediapersons reached the site. An ASI came rushing in and got the body released. She was provided PPE kits and the cremation of her husband was finally done with the help of administrative staff by following Covid norms.

Dr Kamraj, mortuary in-charge, said, “I have learnt that the woman wanted to take the body of her husband home which could not be allowed as doctors suspected it to be a case of Covid. She came to me this afternoon for the first time.”