Victims were against her extramarital affair with a granthi 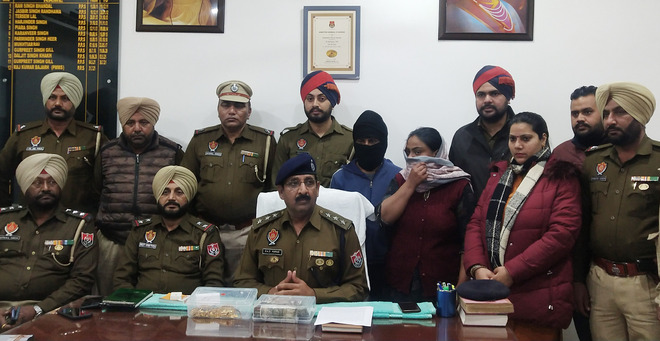 Accused in the custody of the Tanda police

In a shocking incident, a woman, whose husband lives abroad, allegedly killed her father-in-law and mother-in-law, residents of Jaja village in Tanda sub-tehsil, and set their bodies on fire in the village on Saturday night. The woman allegedly strangulated and stabbed them with the help of her ‘paramour’ who is said to be a granthi at a gurdwara in Data village.

The woman tried to paint the matter as robbery and murder, but during the police investigation and as per circumstantial evidence, the matter was exposed. The police have arrested the woman and the granthi after registering a case of murder against them. Her husband, Ravinder, settled in Portugal soon after his marriage, said he even warned Mandeep against her affair, but she ignored it and kept threatening to kill his parents.

The accused woman had got annoyed with her in-laws for creating a hurdle in her extramarital affair with the granthi. The woman tried to paint the matter as robbery and murder, but during the police investigation and circumstantial evidence, the matter was exposed. The police have arrested the woman and the granthi after registering a case of murder against them.

According to information, around 11.15 pm on January 1, Tanda police received information that an elderly couple were murdered in their own house at Jaja village and their bodies were set on fire.

DSP Raj Kumar along with Tanda police station SHO Surjit Singh rushed to their house and found the flames in the bedroom of Subedar Manjit Singh (56) (retd) and his wife Gurmeet Kaur (52) and their bodies were badly burnt. At that time, Ravinder Singh, son of the victim, and his wife Mandeep Kaur were present in the house.

Ravinder said he settled in Portugal soon after his marriage. After a few days while living there, he got to know that his wife talked daily to some unidentified person late at night on the phone for hours. Ravinder even warned Mandeep against her affair, but she just ignored it. They even had several disputes over the matter. Ravinder said Mandeep kept threatening to kill his parents and due to this warning, he came to India on December 7 last year.

According to the DSP, it came to light that one door of the bathroom attached to Mandeep’s room opens in the bedroom and the other in the lobby, both of which were not latched. In this regard, an in-depth investigation was done and the circumstantial evidence did not match with the story told by her.

Keeping in view the sensitivity of the case, Hoshiarpur SSP Kulwant Singh Heer formed a team, headed by SP (Hqs) Ashwini Kumar, including DSP (D) Sarabjit Rai, Inspector Balwinder Pal and Inspector Karnail, and ordered a thorough investigation. The team along with Tanda SHO SI Surjit Singh went to the spot and investigated and solved the murder case in a few hours.

According to the DSP, during investigation it came to light that Jasmeet Singh, who was originally a resident of Sanghar village in Amritsar, worked as a granthi in a gurdwara of Data village, had a love affair with Mandeep. Mandeep used to consider her mother-in-law and father-in-law as an obstacle in the way of her affair. Therefore, after her husband left house at 11am, she called her lover to home and both killed them and then set the dead bodies on fire so as to destroy the evidence. After the incident, both of them stole jewellery from the house, with Jasmeet took along with him and the police had recovered it from him.

The DSP said after registering a case for murder, destruction of evidence and theft, both the accused had been arrested. He said Mandeep Kaur admitted that on November 23, she had stolen about 150 gm of gold along with her lover Jasmeet from her maternal home at Doburji village. A case has been registered in this regard at the Tanda police station.

The DSP said the knife used in the incident, a motorcycle and gold bangles, chains with locket, chain with locket, gold rings, diamond rings, earrings, diamonds tops and Rs 45,000 had been recovered from the accused.