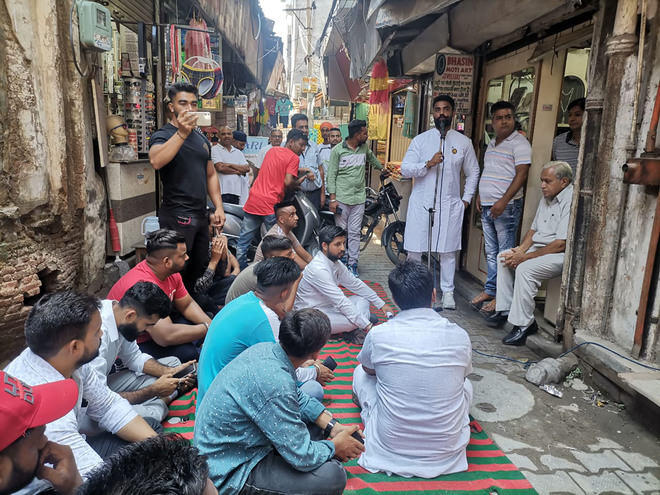 Activists of the Youth Akali Dal and shopkeepers protest against district administration and the MC at Amrit Bazaar in Kapurthala.

Youth Akali Dal (YAD) leaders and shopkeepers of city markets held a protest against the district administration and blocked the road in Amrit Bazaar here on Monday. They were raising their long-pending issue of demolition of old, dilapidated buildings in the congested city markets.

Avi Rajput, vice-president of the Youth Akali Dal, said party leaders and shopkeepers had been demanding the demolition of the dilapidated buildings in the Heritage City, Amrit Bazaar and Sarafa Bazaar. As their demand was not being met, they blocked a road to awaken the authorities concerned, the local Congress MLA and the Mayor of the Municipal Corporation. The leaders raised slogans against the district administration and the authorities concerned.

SHO Gaurav Dhir reached the spot to pacify the protesting leaders. He received a memorandum of demands from them after which the dharna was lifted. YAD leaders Nikka, Monu, Vipan, Navtej Singh, Lakhbir Singh and Golu said, “The condition of the buildings is so bad that they can collapse at any time. The bricks of the walls are coming off. The guards and bars have become weak and bowed. The cracks are clearly visible on the walls. But our MLAs, who brag about development, roam in their AC vehicles and air-conditioned rooms and residents of the city are living in the shadow of death all the time.”

Rajput said besides providing basic facilities to the residents of the city, it was the responsibility of the civic body to protect them from the dilapidated buildings. But after seeing these buildings, it was clear that the MC was not serious about fulfilling its responsibility and it hardly cared about the residents’ lives. He said the old buildings could collapse anytime during the rains.

The shopkeepers said, “The residents are worried about the potential threat posed by them. Living around these, which are closed and unused for years, is quite risky and we have alerted the MC about such buildings a number of times.”

The YAD leaders warned, “If the dilapidated buildings are not demolished soon, the MC office would be gheraoed and effigies of civic body officials will also be burnt.”