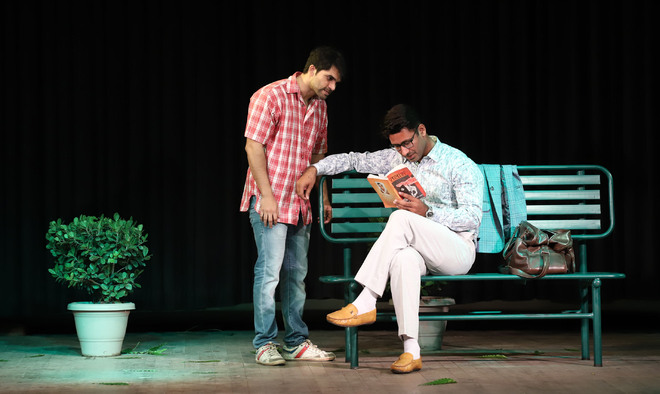 It was in March 2020, days before the first Covid lockdown was imposed, that Jalandhar-based theatre group YUVAA performed its last show in the city.

Exactly a year and a half later, today YUVAA Theatre, Jalandhar, performed a new play in the city last evening for the first time since the lockdown was announced by the government to check Covid-19 in March 2020. The play, Chidiya Ghar, was performed at the KL Saigal Memorial Hall, Jalandhar.

In the maiden outing following the year-long restricted gatherings, the play saw around 100 city people turning up for the show. Though the popular theatre group YUVAA had performed in Ferozepur and Chandigarh in the intermittent relaxations between lockdowns, the regular theatre productions and annual theatre festivals in the city remained suspended due to strict Covid restrictions.

With vaccination drives picking up and things looking to slide towards a new normal, YUVAA Theatre put up its new play, Chidiya Ghar, penned and directed by the group’s creative director, Dr Ankur Sharma, this evening.

Speaking to The Tribune, Dr Sharma said, “It is hugely comforting to see people giving love to theatre. We had stopped our weekend theatre shows in view of the pandemic, but we plan to restart them with the reassuring response to our first post-Covid show in Jalandhar today. The play was developed by the theatre group during a very trying period amidst the pandemic gloom, when all theatres and stages were shut for over a year. While most of the group’s actors struggled to find work to survive during the lockdowns, very few remained devoted to keeping theatre alive in the region. We have put together a team and come up with production again by sheer passion in these trying times.”

The play is inspired from the increasing alienation and insensitivity that the online culture and digitalisation have added to the already alienated haves and have-nots in the present times in the country.

“Chidiya Ghar” depicts two such different citizens from a modern city of India who happen to meet in the Central Park of a posh modern locality. Prakash is married, is working on a good post, a father to two kids and a largely content fellow. Jai, on the other hand is an unemployed single economically unstable young man. He is struggling with such existential questions that Prakash does not feel the need to think about except in the books he reads.

The play was staged with only two seasoned YUVAA actors on stage, Vishesh Arora and Sarvpreet Singh. Lights for the play were designed by Rishi Cheema and music was arranged by Abhishek Bhou. This play was hosted as a free entry for theatre lovers of the region.