Not satisfied with 99 percentile, Pulkit gave all 4 attempts to score AIR 1 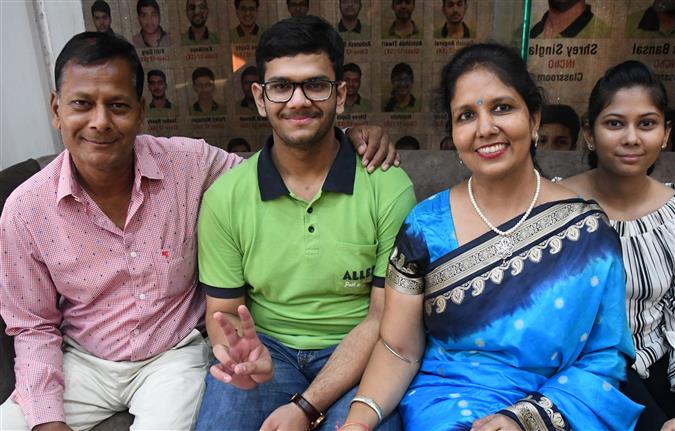 Pulkit Goyal is gearing up for JEE Advanced now

Pulkit Goyal from the city topped the country by scoring 100 percentile in the Joint Entrance Exam (JEE) Main, the results of which were declared on Wednesday morning.

Born in 2003, Pulkit has been an ace student throughout. He scored 94.8% in his Class XII at Sanawar School and 98.6% in Class X at St Joseph Convent School, Bathinda. His father Vijay Kumar Goyal is a businessman, while his mother Neelam Goyal is a homemaker. He got relocated to Kota to prepare for the exam.

A maths enthusiast, Pulkit loves to solve problems and believes in understanding the concept. With All India Rank 1 in bag, he is all set to take on the challenge of JEE Advanced, 2021.

“I used to study for 7-8 hours a day. For recreation, I spent time with my family. I aim to crack JEE Advanced and pursue engineering in computer science from IIT, Bombay,” he said.

Pulkit’s first goal was to crack JEE Mains, 2021. He did it in his first attempt. He scored 99.88 percentile in the February session. Though the score was enough to get him through to JEE Advanced, he was not satisfied.

He appeared in the March session and improved his score to 99.92. In the third attempt, it improved to 99.99 percentile but he was still not satisfied. “In session 4, I scored 100 percentile with perfect 300 score. My dedication, hard work and perseverance paid off,” he said.

“We are happy that he achieved what he wanted to, but there is still a long way to go. Pulkit will be preparing for JEE Advanced now,” his father said.