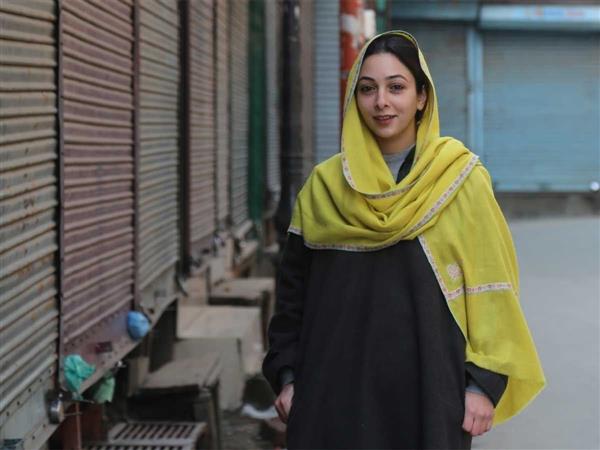 She told her parents that she was taking classes for JEE (Joint Entrance Examination) but Mehak Suhail (23), Kashmir's youngest woman architect, was, in fact, preparing for NATA (National Aptitude Test in Architecture). It was only after the results came out that she told her folks.

Apart from being someone who has completed more than 70 projects in the past two years, a time when the pandemic had derailed everything, being young in a conflict zone is all about adapting, innovating and not shying away from risks is what defines Mehak.

While completing her architecture degree in Pune, when she came to Kashmir to intern for eight months, she realised that there was not enough material available to play with, weather conditions were extreme and no young woman was in the field.

"But I preferred to look at the fact that there was less competition." For someone who never advertised her practice, the breakthrough emerged when she designed a set for an exhibition at a major hotel in the valley, where one of the organisers was a home baker and wanted to set up her bakery.

"There was no turning back after that. People liked the cafe I had done, and the word travelled. It is just 'word of mouth' publicity that established me."

Dealing primarily with men in her profession. she has had to adopt a very different face during work time. "My inherent disposition is to talk softly but now I prefer a more 'firm' stance. There have been occasions that labourers and artisans don't listen because I happen to be a woman. Sometimes clients take you for a ride and do not pay up. One time, a client insulted me and beat my workers. Now my criteria of working with a client are not limited to the fact that he can pay — his conduct has to be conducive as well," says the architect, who also works with the government and has designed two major stadiums, besides working on several heritage projects in Srinagar, Budgam, Gulmarg and Ganderbal and other places.

She, however, stresses that she likes working in the Valley. "There are challenges, but ample opportunities. The challenge is the climate, and mindset of some people. But the pleasure of getting a chance to carry on with your passion in your own surroundings is unparalleled."

There is quite a buzz at The Derma Aesthetics and RK Beauty Studio run by 23-year-old Insha Muzaffar Wani in the Barzulla area of Srinagar. Still, a student of Hotel Management at IHC, Wani, who started the city's first upmarket beauty salon is comfortable giving instructions to the staff while answering questions.

"After all, I started the business when I was 21..." While her offices may be housed in the building owned by her father, the young woman raised capital herself to start both the businesses. "And in the case of Derma Aesthetics, which boasts of cutting edge equipment, I didn't even tell my father that I had taken a loan of around Rs 70 lakh from J&K Bank," she smiles.

Stressing that she always wanted to start her own business ("academics and I seldom got along"), RK Studio, she says has become a trendsetter in the region. "Before us, there were only beauty parlours. What you are seeing right now matches any upmarket salon anywhere in the country. I have not held back from investing in staff training and ascertaining that only top-of-the-line products are used here."

Though not a medical student, before starting her next venture, Derma Aesthetics, Wani wanted to ascertain that she acquired at least some knowledge about the field. "I did a course in Medical Cosmetology for that. Besides the usual botox and filler procedures, we have a specialist team of plastic surgeons from Mumbai on call."

Adding that when she started out, there were not many young women entrepreneurs around, so it was a constant struggle to make people believe in her abilities, Wani says, "My partner in RK backed out on the day of the inauguration, every step has been about proving myself. When you are a young woman, you have to try twice as hard to earn credibility."

Blogger and influencer Aliayah Hussain, an MBA degree holder has a committed clientele of clients -- jewellery brands, gaming arenas and specialised clinics for which she does digital marketing, besides running her own jewellery and skincare page on Instagram.

It all started when during the start of the pandemic, a friend manufacturing masks asked her for help. "The sales rose phenomenally after we launched an innovative and eye-catching campaign on social media. There has been no looking back ever since. I've lived here forever, so I know what will click with people across age groups."

Adding that contrary to popular perception, even small businesses in the valley run by educated youngsters understand the benefits of social media, Aliayah adds, "Mainstream media advertisements are expensive. Also, thanks to the deep digital penetration in the valley, it makes all the sense to have a solid social media presence. Newer businesses are looping in people like me for their business accounts as they understand the short- and long-term benefits."

Even as skincare brands approach her to put their products on her page, she asserts that problems arise whenever there is an Internet shutdown as there is no way around it then. All set to launch her next project 'Kehwa and Konversations' which will focus on the valley's culture, she adds, "It will essentially be about culture, tourism and people who have stayed back and are doing interesting projects here. I am sure it will be as much as an eye-opener for me, as for the readers and viewers."

Kainaat may have studied hospitality, and despite no background in design or running a business, her store 'The Perfect Pair by Kainaat' that sells customised footwear and apparel is quite popular among youngsters.

Starting out at the age of 23, this daughter of a single mother fuses intricate Kashmiri elements (tilla) on kohlapuris and juttis. "Although I started with a small space at my friend's office, I slowly managed to make the business vibrant enough to afford a shop space in very little time."

Working with a supplier from Patiala, who sends the basic footwear, she is in talks for a collaboration with several major brands. "Negotiations with some international brands are at an advanced stage. I am looking forward to a major collaboration soon."

A major challenge is of course, working in a volatile region. "That is something exclusive to Kashmir which people in other parts do not have to encounter. Also, it can be tough for a 25- year-old woman entrepreneur to make people take her seriously. The artisans I work with happen to be men, so how can patriarchy be behind?"

Attributing a major part of her success to social media, she says that it has made things extremely convenient for youngsters like her. "You don't need to have a physical presence to be an entrepreneur today. Infact, I plan to put more effort on the social media part, besides expanding my store, of course." IANS