‘Not every film is for box-office’ 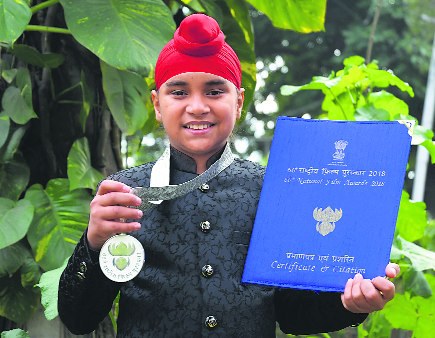 While National Award wasn’t the goal, since its inception everyone in the team knew that we were making a good film...opens up Vijay Kumar Arora who helmed biopic Harjeeta that won the National Award for Best Punjabi Film.

It’s the first time that he’s back in the region to celebrate the feat ever since the awards were announced in August last year. “I have been the DOP in Street Dancer 3D and its post production kept me busy,” says Arora whose debut direction won him the prestigious award. It was the story that made Arora try his hands at direction. “Writer of the film (Jagdeep Sidhu) came to me with many ideas, this story clicked – it had emotions, drama and it was the thrill of shooting World Cup that got me on board.”

Hockey isn’t a new subject in the film industry, and without being pompous he asks one to compare how it is dealt. And all praise is he to the writer for thorough research, actors for putting in their all. “Ammy lost about 18 kgs for Harjeeta, that shows sheer determination; it’s not for every film that actors go to this extreme.” The real winner, Arora labels, is Harjeet Singh Tuli’s journey. “It’s from him that all the details came that make this story endearing. Right from his desire to have ‘elastic wali knicker’ to how he would have kadah prasad from gurdwara in the mornings – each bit made it real.”

That commercial success eluded Harjeeta isn’t what bothers him much. “Not every film is made for box office; such stories touch hearts that’s my big win!”

Quiz him on his favourite biopic, pat comes the answer - Bhaag Milkha Bhaag. “What I really like about this one is how commercial aspect was seamlessly fused with a biopic.” Having spent some four decades into the industry, it’s the joy of each day bringing a new challenge that keeps Arora going. Street Dancer 3D is another such challenge. Though 3D films haven’t really been that successful in Hindi film industry, Arora is positive. “I worked on first full Hindi 3D film ABCD (Any Body Can Dance). Things are only looking up.” Not so good a response for 3D, he attributes to technology still not being up to the notch. “Our theatre screens and even glasses can use better quality. Tanhaji is being lauded in 3D, I am very positive about Street Dancer too.”

All of 12, Sameep Ranaut is rather a pro as he addresses the gathering on Tuesday, with his National Award for best Child Artist for his debut role in Harjeeta shining bright on him. At the right spot at the right time won him not only his first film but also the National Award. Practicing hockey in Sector 42 stadium, Sameep saw and practiced with team Harjeeta including Ammy Virk. When the auditions opened, he was asked to give it a try. Rest as they say is history. Camera never bothered him much, “Director sir really made it easy,” he says rather innocently. Ever since, he has been a part of two Punjabi projects and been trying auditions for Hindi films. “Sports do remain my first love – I play hockey, football, go swimming – everything that I can do.” Son of a government school fine arts teacher, he is as keen on arts as well. “It was chance that got me into films, and I would keep trying to get more work in this field,” says this class 7th child resolutely. His most proud moment - to see Akshay Kumar receive an award at the same ceremony where he was to be feted. “I thought how can I take an award where Akshay Kumar is, but then I was all right,” says the composed he!