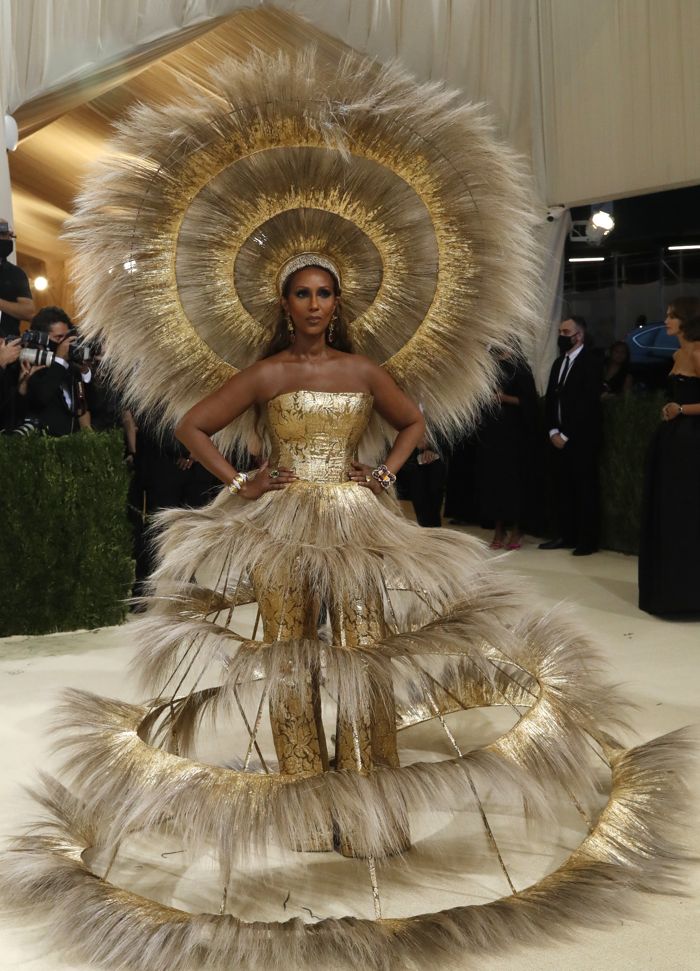 Supermodel Iman in a stunning custom brocade jumpsuit with a tiered, feathered overskirt and matching headpiece by Harris Reed.

The Oscars of fashion you may call it or Met Gala, the looks and attire pulled off by celebs at this event become a conversation topic for years in the fashion world.

Ever since the last year’s event cancelation because of Covid 19 and after much-delayin making Met Gala 2021 happen, it was expected that celeb will make a head-turner of a public appearance worthy of headlines. However, a vaccine mandate inside and a Black Lives Matter protest outside the event did try to mar the enthusiasm of the celebs.

Sponsored by Instagram, the fundraiser took off on Monday with the theme, American Independence. Just like fashion police and the meme makers were glued to the consistent updates, we bring you all the highlights as the celebs bring so much more to the red carpet than their fashion statements.

This annual fundraising gala hosted for the benefit of Metropolitan Museum of Art’s Costume Institute in New York City is taken in all seriousness by the attending celebs. And to prove it one can take a look back at Lady Gaga’s enormous fuschia pink gown, which was just one of the four looks in 2019 Met Gala, or Rihanna, who would be the unopposed queen of it for getting the theme right each time, be it her Guo Pie yellow cape which took two years to be completed or the famous jewel and pearl clad Maison Margiela cape of 2018, her co-chair debut year. And the men don’t stay behind. Who can forget Jared Leto bringing an extra pair of head to also leave no stone unturned to keep up with the ladies and late Chadwick Boseman’s custom Versace outfit with Cape that had red tassels and golden cross detailing?

In his first ever appearance to the gala, the rapper Lil Nas X was quite a revelation. Twitter immediately jumped to the conclusion that the Montero singer had tried to pull a Lady Gaga. The first look with an Ornate cape with intricate gold beading, from there it went down to a strip tease, with a golden suit of armor, followed by a bodycon covered with crystal and elegant Versace’s signature house print.

While our Desi girl Priyanka Chopra and her husband Nick Jonas were missing from this year’s Met Gala, there were many other couples we rooted for who had made it to the carpet just like on the aisle. To name a few, Adrien Brody with Georgina Chapman, Kit Harrington and Rose Leslie, Justin and Hailey Beibercolour coded in black, singers, Shawn Mendes and Camila Cabello. Ones from the sports field were Stephen and Ayesha Curry and Serena Williams with Alexis Ohanian. The Gen Z tennis star, Naomi Osaka, also graced the event with a stylish do with boyfriend Cordae, a musician. She is also the co-chair alongside actor Timothée Chalamet, singer Billie Eilish and American poet and activist Amanda Gorman. As Instagram sponsored the event, so comes the head of Instagram, Adam Mosseri and wife Monica in geometric outfits.

Ever since the news of Jennifer Lopez getting back with her first husband Ben Affleck broke out, the internet cannot get enough of them. In their second public appearance together as a couple, there’s no stopping them from indulging in PDAs. Not even the face masks as the two steal the moment with a kiss with their masks on and eventually the show. Another little too much, for a mask was Kim Karadashian’s all black body-suit created by Demna Gvasalia, the creative director of Balenciaga which comes with a face cover. This has led to another meme chain and it’s making hard for the fans to keep up with Karadashian memes as well.

Billie Eilish had her own princess moment with custom tulle corset gown by Oscar De La Renta as she entered to be the co-chair in the Met Gala. But this princess exercised her power. In a first, in exchange to wear that particular dress of the designer company, this Cinderella made the tables turn and demanded them to terminate all their fur sales. As she becomes the first guest to elicit an ethical policy change, this is the real Gen Z change that we expect the celebs to bring in!

Madonna’s daughter, Lourdes Leon made an appearance wearing fuchsia pink gown with metallic embellishments which had remnants of Cher’s iconic style. She made a statement by bringing her armpit hair to the red carpet.

Compiled by Sheetal with inputs from agencies