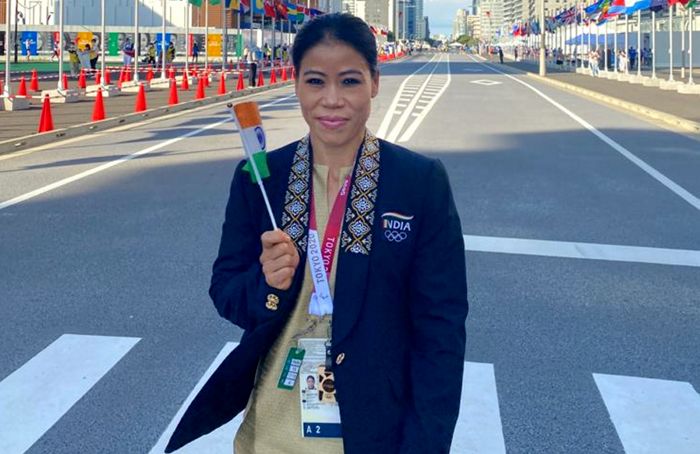 After a damp Wednesday, the Indian contingent at the Olympics brought back the cheer on Thursday morning as the Indian hockey team beat the defending champions Argentina 3:1. With PV Sindhu storming into the quarter finals, archer Atanu Das stunning two-time Olympic champion Oh Jin-Hyek and boxer Satish Kumar stomping into super heavyweight men’s quarter-finals, fans waited with bated breath for Mary Kom in the late afternoon for a photo finish to the day.

Alas, that was not to be. Kom lost to Colombian Ingrit Valencia evoking mixed emotions just as Kom, with tears in her eyes and a wide smile on her face. Just like the sports fans everywhere, Bollywood celebs took to social media to applaud and cheer the sports stars representing India at Tokyo Olympics 2020.

“Super Performance by #TeamIndia!! We are cheering for all of you!!,” tweeted actor Suniel Shetty. As the Games opened on July 23, plenty of celebs took to hashtags #Cheer4India and #GarvHai, wishing the very best for Indian sportspersons. “Best of luck #TeamIndia! I’m cheering for each and every one of you! P.S. @MangteC gave an extra loud cheer for you! #PVSindhu, @ImDeepikaK- go Queens! Show them @MrizaSania @manpreetpawar07 #Cheer4India #GarvHai #Tokyo2020,” posted Priyanka Chopra, also sharing a picture of her enjoying the opening ceremony on TV.

Weightlifter Mirabai Chanu was feted by the celebs for the glorious start of the games with a silver medal, with actors Abhishek Bachchan, Mahesh Babu, Taapsee Pannu, Randep Hooda, Riteish Deshmuk, Sunny Deol and others congratulating and applauding her. Keeping a watch on the contingent, celebs are cheering the wins. Actor Farhan Akhtar, who essayed the role of a boxer in his latest Toofan, cheered boxer Pooja Rani Bohra, tweeting, “Super stuff @BoxerPooja!! Into the Quarterfinals .. all the best and to your corner. Todun Taak!!” Just a win away from the medal, Pooja Rani Bohra’s next bout is scheduled for August 3. “Boxer Satish Kumar into the QF at #Tokyo2020 Superb!! Keep going brother Raised fist Todun Taak..!!,” Farhan tweeted on Thursday.

Taapsee Pannu ‘hearted’ an article about Atanu Das and Deepika Kumari, the arching couple, participating in Olympics together have made it to quarter finals. “This is so beautiful! ... their story :)”

In the high of the wins, celebs too in a rush to celebrate ended up tagging wrong people, wrong tournaments. Milind Soman mistook Priya Malik’s World Cadet Wrestling Championship win for the Olympics. “Sorry, should have checked before my earlier tweet, but was too overcome with joy ... Priya Malik won Gold at the World wrestling Championships! Onwards and upwards,” tweeted Soman realising the error. On a follower’s request to delete the erroneous tweet, Soman responded, “I know now, still happy :) and I won’t delete the tweet, sometimes it’s ok to make a mistake (sic).”

He sure wasn’t the only one to get the two competitions mixed up. Actor Vatsal Sheth and Bhumi Pednekar too congratulated Malik on ‘Olympic’ win. “”Baby gold gold gold gold gold #PriyaMalik #tokyoolympics #olympics2021,” posted Bhumi on her Insta story. Vatsal corrected himself posting, “Sorry not Olympics … but we are still super proud of you.”

Actor Tisca Chopra came on the trollers’ target as she got Mirabai Chanu’s picture wrong while wishing her on her silver win. She apologised for the ‘genuine mistake’.