Maggi gets a new twist by this Ghaziabad vendor, available in Fanta flavour 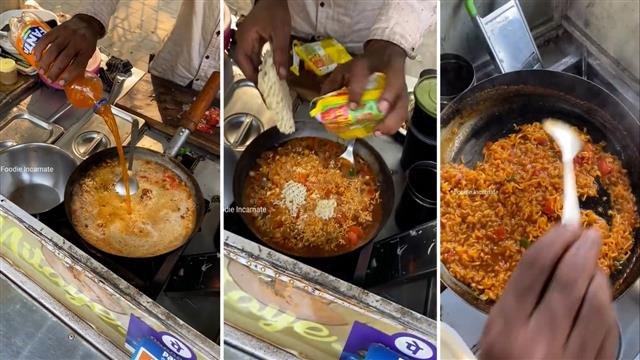 Maggi has a special place in the menus of foodies. As a comfort food, a hill-station favourite, late night snack or a quick bite for weekend get together with friends, Maggi is an all-rounder. And talk about experiments with the instant noodles, there is a long list in that section too. A street vendor in Ghaziabad has given yet another twist to Maggi by preparing it in Fanta.

There is a video on YouTube by food blogger Foodie Incarnate that is going viral. In the video, a street vendor can be seen replacing water with Fanta to prepare the brick of instant noodles. So, this cook first sautés onion, capsicum, green chilli and tomato in oil; once the veggies are cooked, he adds more than half the bottle of 500ml Fanta to it. Next he crushes the instant noodles into the boiling Fanta concoction. He then adds Maggi masala sachet and tops it with his desi touch by putting aamchur powder, salt, coriander powder, red chilli, turmeric powder and rock salt. Another dose of Fanta makes it to the pan here.

As he serves the dish on plate, he sprinkles chaat masala and lemon on it.

Watch the unique Maggi experiment for yourself:

While you may be sceptical about the taste, the vendor says he has been selling it for close to six months. He came up with this idea when one of his customers asked for a bottle of Fanta to drink with his plate of ramen. The Ghaziabad street vendor offered to experiment with the two and he says, it clicked. For a Fanta Maggi, this chef charges an extra Rs 30 and you can enjoy the flavour of soft drink while eating the instant noodles.

At first hesitant, but when the blogger tastes the soft-drink flavoured Maggi, he is left surprised. He tells his viewers that it’s sweet and tangy and masaledaar.

No wonder, the unusual food experiment is selling well.