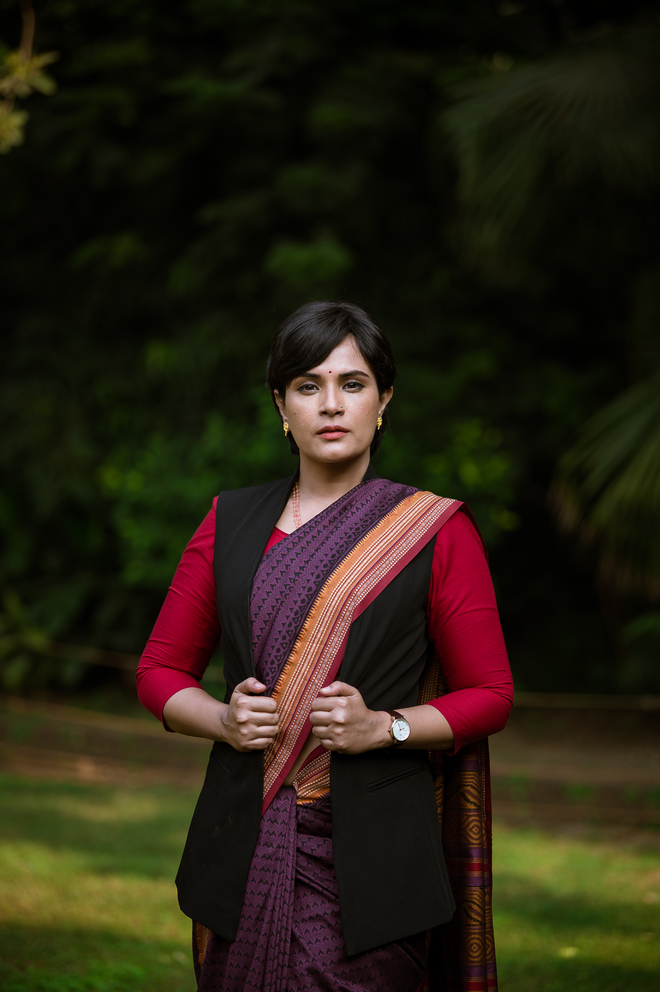 icha Chadda looks for meaningful roles and in Madam Chief Minister, she feels she’s got one. A film on a woman Dalit leader, working with Subhash Kapoor whom she admires and a challenging role – all ticks in place, Richa delved into political biographies to step in the shoes of Tara Roop Ram, the Madam Chief Minister.

While many would assume that it’s a story inspired from Mayawati – short hair, Dalit, set in northern India – Richa clarifies that it’s not just one story that the film is inspired from. “By now I hope that the trailer has made it clear – it’s story of a Dalit woman politician but not of Mayawati. The story does take elements from real life, but from many women – Benazir Bhutto for one, Sheila Dikshit for another.”

Richa says this is a story worth telling. “I am glad today we can tell stories that mean something – something like Sairat that’s on honour killing.”

That the film gets a theatrical release on January 22 in the current scenario doesn’t worry Richa. “I am not anxious about something which I can’t control. My job is to play the part with honesty and integrity.”

As she had watched Tenet in a theatre, she hopes that the audience would venture out to watch Madam Chief Minster too. “I went with full precautions. I think the audience should consider going back to cinemas with full safety measures.”

Richa has her list of favourite women politicians. “I am quite fond of Mayawati, Behenji as she is called. When she joined politics, it was unheard of for a Dalit woman to do so. I admire Sonia Gandhi for her willingness to forgive the murderers of her husband. I also quite like Sheila Dikshit for when I was studying in Delhi, she was the Chief Minister and the green cover in Delhi actually increased during her tenure. From the current ones, I quite admire Mahua Moitra – she stands her ground, she is unafraid, has a sense of humour and never loses hope.”

As for her Punjabi connect, the Masaan actor says, “I really want to play a cool Punjabi character. I want to bring revolution there too, where people have new role models.”

Richa has recently got the Bharat Ratna Ambedkar award and the Vegan Fashion Icon award. “Bharat Ratna Ambedkar is really special because it means people have noticed that I never fail to raise my voice against injustice. While doing this film, I read a lot about Ambedkar. To get an award after your role models means a lot.”

Richa turned vegan about two years back, and was recently given the Vegan Fashion Icon award. “I was always a vegetarian, so the jump to veganism wasn’t all that difficult. Though I wouldn’t say I don’t miss dahi or butter with my paranthas but I find veganism very healthy and rewarding.”

About online trolls Richa maintains a cool air. “I am entertained by the trolls. I know they are stupid but I am amazed at the length they go to prove that they are stupid. As for the manufactured outrage like love jihad makes no difference to me.”

Richa’s learning from the pandemic was that we can do with far less stuff than we have. “I also became more independent.” In 2021 she hopes to write and produce a comedy film. “One can say a lot through humour. I would love to do a slice of life comedy.”