Director and writer Pushpendra Nath Misra, who delighted us with his web series Taj Mahal 1989, somehow can’t orbit Ghoomketu in the right direction and space 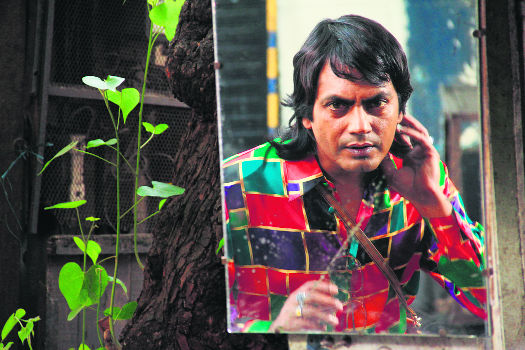 Pushpendra Nath Misra was meant to make his directorial debut with Ghoomketu. But call it ironies of life, serendipity… just like the arc of his unusual characters, things often happen of their own volition, as they are meant to be and in this case for Misra’s own good. He hit the headlines and the digital space with his much-acclaimed web series Taj Mahal 1989.

Now his launch vehicle, Ghoomketu, has finally found a release on Zee5. Sure the gap between its making (it was completed in 2014) and release on OTT platform does make it seem a tad too jaded, even if the premise is not quite dated. The story of a small-town man seeking a dalliance with the world of arclights is perennial. As long as man is alive, he will continue to dream of bigger things.

So does Ghoomketu (Nawazudin Siddiqui in the titular part), who believes there is a writer within him. As his first humble attempt to seek a job in local journal, Gudgudi, is turned down, he sets foot in Mumbai. Thereafter, the narrative moves back and forth. His small-town life is peopled with a stern father (Raghubir Yadav), an indifferent stepmother, a loving bua (confident and competent Ila Arun) and even an overweight wife, whom we get to see only in the end. The one in Mumbai finds him brushing shoulders with a producer who tells him to write a comedy; for that is one genre that people like the best. But the advice the film proffers is not taken seriously by the makers themselves and comic portions are more stilted than dynamic.

On the plus side, in Ghoomketu, like Misra’s web series, there is no grand-staging of events. Misra does not overwhelm you with a sweeping force of emotions, yet tugs at your heartstrings in a subtle fashion. In his own way, he both pays an ode to Bollywood as well as looks at its formulaic churning. Now these parts, where we are taken to different genres of cinema horror, sci-fi et al , are at times funny. At other points, a tad too monotonous and test your patience. The bit on Arnold Schwarzenegger sure brings a smile, but the same can’t be said for most such interjections. Big B’s presence as himself, close to the climax, does perk up things, but it’s a little late in the day.

Yes, in the garb of an ordinary tale of a man, Misra is making a larger point as also trying to bridge the gap between small-town Mohana and Bollywood. Nawazuddin fits the bill of this man with aspirations and stars in his eyes. Anurag Kashyap as the corrupt inspector made in charge of missing case of Ghoomketu provides some relief. Kashyap’s back-story too is built like a cinematic reel. One scene frames the two together, the mentor and protégé of real-life Bollywood, in a smartly executed cut.

No doubt Ghoomketu tries to be a clever film with some interesting play of words and writing. However, while we begin by investing in Ghoomketu’s travails, it doesn’t hold your attention for too long. The storytelling ebbs more often than rises to finally arrive at a heart-warming climax.

Even if not all stories end in the grandiose Bollywood manner, each one of us has a story that is worth telling and moments worth cherishing. But is the film? As Nawazuddin says in the beginning,“Yeh koi Bollywood film ka trailer nahi hai, this is my story, dekhna hai to dekho.” Should you? Only if experimental cuts with an additional topping of our love for Hindi cinema is your cup of tea! This one takes the formula on its head, gives it a spin and lands on a ground we so wish was far more funny and exciting.

Abhishek confirmed Aishwarya and Aaradhya's diagnosis on the...