As the sets of Ranbir Kapoor-Shraddha Kapoor-starrer film is gutted by a major fire, it reminds us of such horrific incidents from the past : The Tribune India

As the sets of Ranbir Kapoor-Shraddha Kapoor-starrer film is gutted by a major fire, it reminds us of such horrific incidents from the past 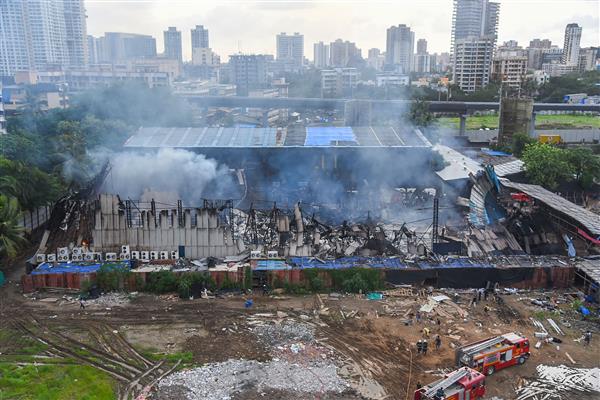 Smoke rises from a fire at a film set at Chitrakoot Ground next to the Andheri Sports Complex, in Mumbai. PTI

Elaborate sets, risky action sequences and scenes involving fire, film shoots have often ended up in major accidents. Unfortunately, one person is reportedly dead in a fire incident on the sets of Ranbir Kapoor-Shraddha Kapoor starrer untitled film on Friday.

A fire reported broke out on July 29 around 4:30 pm at the Chitrakoot Studio in the Andheri West. Reportedly, the fire was extinguished by Mumbai Fire Brigade at around 10:35 pm. The incident is said to have delayed Ranbir–Shraddha’s shoot schedule that was about to begin.

Accidents on the sets have led to similar consequences earlier too, mostly involving fire. A fire broke out on Prabhas-starrer Adipurush’s sets in 2021. No loss of life was reported.

Back in 2015, while a dance sequence was in progress in Filmcity for ABCD: Any Body Can Dance 2, a fire on the sets was reported which was caused by a short circuit. About 600 people were present at that time, who were all safely evacuated. Both Shraddha and her co-star Varun Dhawan tweeted about the incident, and their resolve to be back to shoot the next day!

Varun Dhawan had a brush with such an accident even before. His Main Tera Hero shoot in Thailand was disrupted by a fire in 2013. Reportedly Varun and his co-stars Nargis Fakhri and Ileana D’Cruz were in their vanity vans when a generator caught fire. No one was hurt in that incident.

A year before, three crew members were injured in a fire on the sets of Dabangg 2 at Mehboob Studio, Bandra. While the film’s lead star, Salman Khan, accompanied the injured to a hospital, his brother Arbaaz Khan, who was directing the film and their father Salim Khan too reached the hospital. The fire reportedly broke out due to an electric blast.

Sanjay Leela Bhansali-directed and Amitabh Bachchan and Rani Mukerji- starrer Black had a fire incident on the sets at Mumbai’s Film City back in 2004. The accident burnt down about 70 per cent of the sets giving the director sleepless nights. It delayed the shoot schedule.

The most infamous fire incident to have occurred during the shooting of a film is probably that of Mother India. Shot between hay sacks in Gujarat, the film’s heroine Nargis was trapped when playing the ‘real’ hero, her co-star Sunil Dutt saved her. Both suffered injuries. The accident is said to have brought the two together and they got married the following year in 1958.

If film sets saw fires, TV shows too had its share of accidents. The most devastating fire broke out during the filming of TV show, The Sword of Tipu Sultan. Reportedly 62 people perished in the Premier Studios, Mysore in 1989. Its director Sanjay Khan suffered major burns and was hospitalised for over a year. He underwent 72 surgeries to make a miraculous comeback.

Back in 2013, the sets of Comedy Nights with Kapil caught fire due to a short circuit. There was no loss of life, but the sets were damaged badly in the mishap.