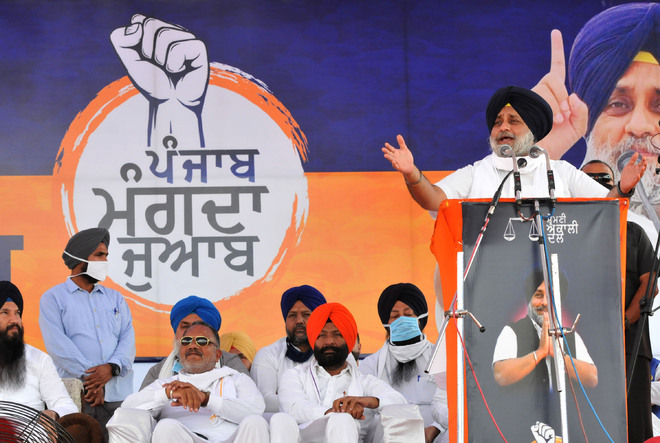 Addressing his ‘Punjab Mangda Jawab’ rally in Doaba on Monday, SAD president Sukhbir Badal said Capt Amarinder Singh-led state government had failed farmers while the SAD championed farmers’ cause. Addressing a huge crowd carrying party flags, Badal, who was speaking at the rally organised at Nadala by SGPC chief Bibi Jagir Kaur, said the Akali Dal had steadfastly supported farmers in their cause while the Congress had failed them.

Badal said electricity bills of people of the state had been piling up for the past four years of the Congress government. The Congress bought cheap electricity and sold it at hefty rates, he said.

Takes a jibe at Khaira

Addressing electricity tariffs in the state, he added, “When we talk of the state, the state government is purchasing power at Rs 2.80 per unit but selling it at Rs 9 per unit to Rs 8 per unit to industry and domestic consumers, respectively. You see the profit of the electricity board is Rs 1,200 crore. They are earning money.”

Badal said it was in tandem with the Shiromani Akali Dal that the SGPC under Bibi Jagir Kaur and the Delhi Sikh Gurdwara Management Committee under MS Sirsa provided relief to farmers.

Badal said, “I can proudly say today that due to the work of our associate bodies like the SGPC under Bibi Jagir Kaur and DSGMC under MS Sirsa that the farmers who had been detained were freed. SAD has all along been fighting for the cause of farmers. But what has the Congress done for them.”

He said outsiders like people from Rajasthan and Jammu had teamed up with Congress legislators to form a sand mafia in the state which had caused a loss of Rs 2,000 crore to the state exchequer. He said while the state had suffered a loss of around Rs 6,500 crore in excise revenue, the state could not collect even Rs 100 crore out of the Rs 1,400 crore revenue projected by the Congress government from sand mining.

Doling out pre-poll promises, Badal said if the SAD formed a government in the state it would not allow implementation of the three agricultural laws. He announced that besides ensuring procurement of food grains on the MSP, the SAD government would also announce an MSP for vegetables, fruits and milk.