Punjabi singer Sidhu Moosewala has earned along with a few controversies

At a young age Punjabi singer Sidhu Moosewala has not only earned a lot of fame, but also courted innumerable controversies. His friends and fellow singers try to decode the man 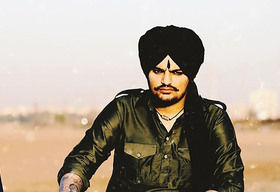 A singer with a fan-following running into millions, Sidhu Moosewala, in his mid-twenties, enjoys a stardom that only a few can imagine. He is popular for largely gangster rap, but his friends and co-workers swear by the down-to-earth nature of this young singer, who has accrued as much fame as controversies.

“He’s an amazing artiste and person. He writes and sings in his own style, keeps to himself and yet is so successful. You know when so much fame comes, it attracts detractors,” says Binda Vehniwal, a friend. “Sidhu Moosewala was a bright student, who got admission in Guru Nanak Dev Engineering College, Ludhiana, on his own merit,” adds Binda.

The journey so far

Born Shubhdeep Singh Sidhu in village Moosa, Mansa, Punjab, the lyricist-singer did his engineering in Ludhiana, where he also learnt music, before moving to Canada. While singing continued, his big success came with gangster rap So High. Ever since his songs have made it to the top charts in Punjab, UK, Canada and New Zealand. His song Roti, with an image of just a roti, earned 5.5 million views within two weeks!

Moosewala’s social media pages are full of his pictures with fancy wheels, farm tractors and his on-screen identity — guns, as also his mother’s pictures. Binda calls him a very respectful son. “People often confuse his on and off screen persona; nothing can be far from truth.”

On his mother’s birthday Moosewala released the song Dear Mama, which gathered 10 million views in a week’s time. The song, which stars his parents, gives a glimpse of his childhood through pictures. He actively campaigned for his mother who became sarpanch of Moosa village in 2018. Director Baljit Singh Deo met him just after he rose to stardom. “There’s something about him that is not run-of-the-mill,” he says.

However, Moosewala has also hit the headlines for being on the wrong side of law, be it an FIR for promoting violence, hurting sentiments of Sikhs or the recent firing incident. “Sadly these youngsters get too attracted to what’s trending,” says folk artiste Pammi Bai. “It’s like a shooting star; it shines very bright but is short-lived. Honey Singh was ruling Bollywood at a young age, where is he today? To have everlasting fame like Gurdas Maan one needs to have continued passion,” adds the folk artiste. — Mona

Tokyo2020 medals are not edible; you don't have to bite the medals...but we know you still will, say Olympics organisers