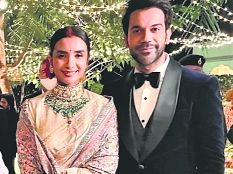 Rajkummar Rao and Patralekhaa, who tied the knot on November 15, hosted a reception party in Chandigarh the same night.

A picture of Mr and Mrs Rao as newlyweds is going viral on social media. This picture was shared by Chief Minister of Haryana Manohar Lal on his Twitter handle. The picture showed the couple posing with the CM. Patralekhaa looked stunning in a golden saree and Rajkummar Rao looked dapper in a black tuxedo suit. Meanwhile, Farah Khan, who was a part of couple’s big day, has also shared a picture with the newly-wed couple on social media. She called it an ‘emotional wedding’.