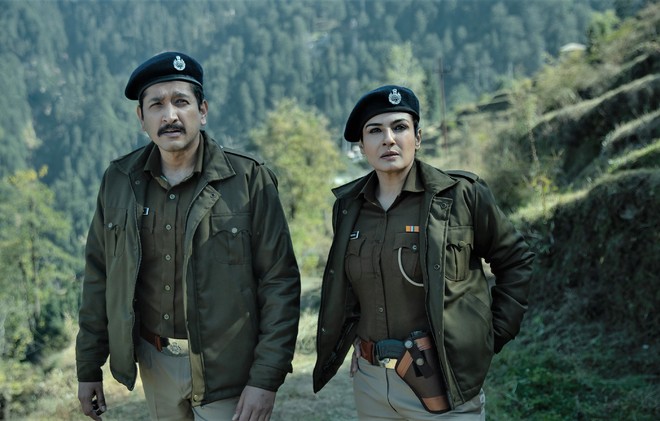 A young foreigner is dead and the mystery begins. The needle of suspicion points in all conceivable directions. A woman politician’s son, another political heavyweight’s son-in- law, an elderly man running a café and selling intricately woven wrist bands to young girls, the series takes a while to introduce us to its many shaded and shady characters.

Like the Murder on the Orient Express more than one person could possibly be the murderer. Why even a mythical nartendua (part-human, part-panther) is the possible killer.

As we are drawn into the jigsaw puzzle, the whodunit engages and the sleepy town Sironah in Himachal Pradesh seems just right for the crime thriller with which lovely actress Raveena Tandon makes her digital debut. Playing a SHO, Kasturi Dogra, on long leave to catch up with her homely duties, her passion for solving that one big case draws her back to her job. Only now the crackling cop in her has not only to contend with cracking the case but also the new incumbent Angad (Parambrata Chattopadhyay), who has replaced her as station in charge.

Together they make an odd pair. She is rustic, he is sophisticated “English medium”, you know. He seems to be in control and she is ready to play the true cop wielding her gun and baton at the slightest provocation.… Just as they become friends, roles are reversed.

What is interesting is the series does not pander to gender stereotypes. Sure, it feeds into certain notions about foreign nationals being high on drugs and free sex and self-serving politicians driven by avarice. Despite familiar ground as the volatile cocktail of drugs and power seems to be the thriller genre’s eternal favourite, Aranyak has enough power to make for a compelling fare.

Raveena proves OTT can be a boon even for established stars of yore. The series gives in to her starry aura in one particular episode where her perfectly set hair and airbrushed makeup don’t quite go with her onscreen character. Otherwise, she fits the bill of a woman cop with a mind and a body of her own.

Her counterpart Parambrata reminds us of his Kahaani days when we North Indians first saw his talent. With ghosts from the past tormenting him, his is quite a well-fleshed out part to which Parambrata does full justice. Other actors like Ashutosh Rana, Zakir Hussain and Meghna Malik too make their solid presence felt.

What may seem like incongruities, the access Ashutosh’s character has inside the police station long after he has retired might make you gape in wonder. But remember, it’s a small place where everyone knows everyone. Yet, each person seems to be hiding something. Despite two cops in the same house, neither the father nor the wife can smell the rat, ahem what Kasturi’s husband is up to.

As a viewer you can sniff a few things/ suspects. Nevertheless, this cat and mouse game has enough bends to keep you transfixed. The turn in the sixth episode is rather unexpected. Each episode as expected of a thriller ends on a cliffhanger and binge watch is a given. The mystique reflects in the atmospherics that appear organic. The background score gels and does not overpower your senses.

What captures your imagination and attention is storytelling (story by Charudutt Acharya), taut direction (Vinay Waikul) and fine performances.

Streaming on Netflix, the final revelation, or shall we say revelations, may not be as fascinating as the build-up. But the guessing games that the series keeps you involved in are binge-worthy. And, a second season is an inevitable possibility. We sure are looking forward and hope Parambrata can reappear. As what watch the series to know!