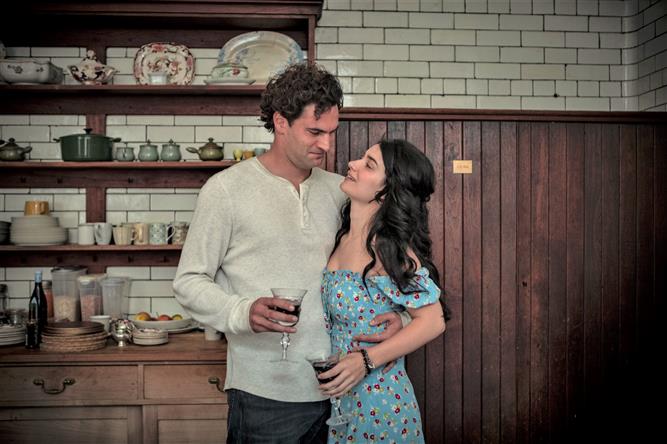 This new Netflix series is a dark psychological thriller, full of twists and turns. Based on a novel by Sarah Pinborough, a few minutes into it and you know a real mystery lies in waiting. Louise (Simona Brown) is a single mother, who is looking for some spark in her boring life. In a chance blind date, she ends up kissing David (Tom Bateman). But the next morning, he turns out to be her new boss! David’s wife Adele (Eve Hewson) is also in office on his first day. Though everything seems perfect about this couple, you still end up feeling that something is wrong.

Directed by Erik Richter Strand, Behind Her Eyes has a rather tense undertone. With every new episode, skeletons tumble out of David and Adele’s closet. Louise, David’s object of affection and Adele’s only ally in the new city, gets consumed in the complicated mind games of the couple. Your heart aches to see how Louise throws away everything she has for a dangerous thrill. Simona is so natural in embodying this role that you can’t miss applauding her. Hewson, as Adele, is terrifying, mostly on the edge and you can’t stop wondering why!

Despite the shifting loyalties between the three, you find the series watchable and in some parts even praiseworthy. But it is the shape it takes in the fifth and sixth episodes that make you question your choice. Rather bizarre and even ridiculous, the show becomes all about drug addiction, strange dreams and dirty secrets. As Adele and Louise bond over night terrors, the former slyly teaches the latter how to control her dreams and eventually get into the practice of astral projection. Adele even floats out of her body to keep a tab on her loved ones and know details about them,which are otherwise secrets.

Adele’s episode at a rehab centre holds a lot more significance than you understand at first. That’s where she meets her best friend Rob (Robert Aramayo), whom she teaches how to travel in the dreams. In no time, Rob falls in love with her and even morewith her grand lifestyle.

From gradual goings-on to sudden setbacks, the show keeps you at your wits’ end. There is so much unanswered till the last minute that when the finale arrives, you are simply shocked. Stupid? Surprising? Satisfying? Choice is yours!

The cast has shouldered the narrative’s demands with such ease that you’ll be annoyed and impressed at the same time. If you decide to watch it, remember the genre will change, more than once. It’sa ride that may leave you thoroughly pleased or high and dry.