The Trial of the Chicago 7, The Crown win big at SAG Awards 2021 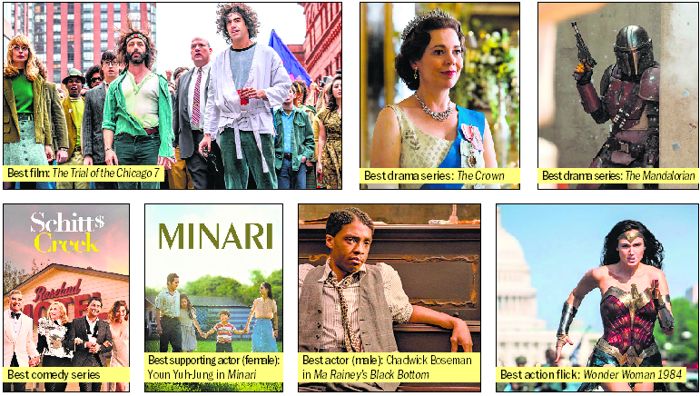 In the wake of the ongoing Covid-19 pandemic, the downsized ceremony, including monologues from presenters and acceptance speeches, was pre-taped.

The trophy for the outstanding performance by a cast in a motion picture, which is SAG-AFTRA’s equivalent of a best picture award, was given to Netflix film, The Trial of the Chicago 7.

Netflix drama series The Crown won the outstanding performance by an ensemble in a drama series, including a trophy for British star Gillian Anderson for her stellar portrayal of former British Prime Minister Margaret Thatcher in the fourth season of the show.

The winning streak of Hollywood star Chadwick Boseman, who died last August following a battle with cancer, continues with an award in the category of outstanding performance by a male actor in a leading role for the late actor for playing Levee Green, the spirited trumpet player in Netflix’s Ma Rainey’s Black Bottom.

Viola Davis, who played the titular role of the blues legend Ma Rainey in the George C Wolfe directorial based on the play of the same name by August Wilson, won the award for outstanding performance by a female actor.

Pop TV’s acclaimed hit show Schitt’s Creek was honoured with the plaque of outstanding performance by an ensemble in a comedy series for its final season. Catherine O’Hara, who played the matriarch Moira of the formerly wealthy Rose family that is forced to relocate to Schitt’s Creek, won the award for the outstanding performance by a female actor in a comedy series.

Veteran South Korean actor Youn Yuh-Jung scooped the award for outstanding performance by a female actor in a supporting role for her tender act as the wise grandmother Soonja in A24’s Minari. For his powerful portrayal of Black Panther Party chairman Fred Hampton in the Warner Bros film Judas and the Black Messiah, British actor Daniel Kaluuya was named the best male actor in a supporting role.

American actor Jason Bateman won the SAG for outstanding performance by a male actor in a drama series for the acclaimed Netflix crime drama Ozark.

Disney Plus’ The Mandalorian was named the outstanding action performance by a stunt ensemble in a comedy or drama series. —PTI