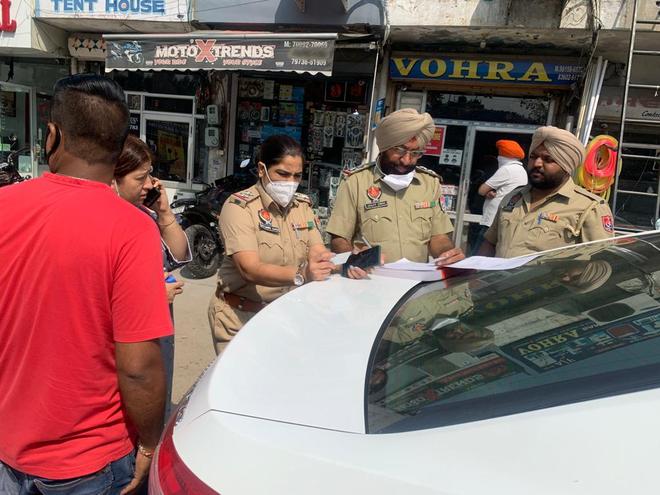 Vehicles being challaned and impounded during the special police drive in Ludhiana on Saturday. Tribune photos

If you are driving without a high security registration plate (HSRP) or using illegal extra headlights on your vehicles, get ready to be challaned or even get your vehicle impounded.

The public should cooperate and help the police to enforce traffic rules and ensure smooth flow of vehicular traffic, especially during the current festive season. Gurpreet Singh Bhullar, Commissioner of Police

For, the Ludhiana Commissionerate Police have launched a special drive to crack down on the traffic rules violators in the Maximum city of the state.

In the first fortnight of the campaign, which was launched on October 1, the police have challaned 1,395 vehicles and impounded 13 such vehicles.

Sharing details, Commissioner of Police (CP) Gurpreet Singh Bhullar told The Tribune here on Saturday that the automobile dealers have been warned against allowing the buyers to take away their new vehicles without affixation of the HSRP.

“In such cases of violation of the Motor Vehicle Act rules, which mandate use of HSRP on each and every vehicle, the automobile dealers will be taken to task,” he asserted.

Of the total challans issued in the first 15 days of the drive, which account for almost 100 challans daily, fine amounting to Rs 4.36 lakh was recovered from the violators issued 858 cash-payable challans, while the violators who got rest 537 challans will have to pay the fine and face action as per rules at the competent courts and RTA offices concerned.

Besides, the Commissionerate Police have also launched a special drive to ensure hassle-free movement of vehicular traffic during the current festive season in the industrial capital of the state.

This drive was kick-started on Dasehra, which fell on Friday, when Joint Commissioner of Police, City and Traffic, Deepak Pareek went around the city along with enforcement teams to identify and ease out the road stretches that were witnessing heavy traffic flow.

“We have made several dedicated vehicle-mounted enforcement teams, which consist of an Inspector, Sub-Inspector and ASIs with challan books and towing vans for immediate action against those causing traffic obstruction and congestion,” disclosed the city police chief.

The Traffic Police have also roped in consultants and NGOs to identify choke points and high priority areas in order to improve traffic flow.

Besides, the police have also been taking inputs and feedback from residents of the city through social media platforms regarding traffic problems being faced by them and their suggestions, which are being worked out.

In the first two days, the enforcement teams fanned out across the city during morning and evening rush hours, keeping vigil till late night.

“Under the initiative, special drives were carried out near Daresi Ground, Station Road, Bus Stand and prominent market areas. In the evening, an awareness drive regarding mandatory use of HSRP was carried out near the Aiyali bridge on Canal Road,” added the CP, while seeking the public cooperation and support to maintain the smooth flow of vehicular traffic, especially during the ongoing festival season.